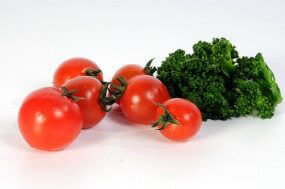 The following article was written by Lauren Gordon, who is PETA’s celebrity marketing coordinator and also a certified holistic health counselor.

The latest weapon against cancer to gain buzz is not some fancy drug with a name that’s difficult to pronounce … it’s food! Everyone from Dr.Oz to famous chefs like Mario Batali are talking about how diet is an important weapon for fighting disease. The “Eat to Defeat Cancer” campaign is a new movement based on research from the National Cancer Institute, the American Medical Association, and the American Society for Nutrition. The campaign is based on the idea that certain foods have properties that can actually help prevent cancer. Prevention is the key to living a healthy life, and what we put into our bodies plays a huge role in overall health and wellness.

“Angiogenesis” is the body’s process for creating new blood vessels, but cancer cells can interfere with this process and use blood flow to stimulate their own growth. Eating an anti-angiogenesis diet aims to starve cancer by cutting off its blood supply, inhibiting the production of cancer cells. Anti-angiogenesis foods include strawberries, bok choy, broccoli, soybeans (especially fermented soy products such as miso and tempeh), and tomatoes (cooked is better). Green tea, dark chocolate, and various spices such as cinnamon can also decrease cancer risk. Notice a trend? These body boosters are plant-based, not processed, low in fat, and high in fiber.

Foods rich in antioxidants and fiber have been shown to lower cancer risk, where as dietary and saturated fat have been shown to increase risk. Meat is a common source of saturated fat and cholesterol, and it lacks fiber. Studies have shown that vegetarians are 40 percent less likely to develop cancer than their carnivorous counterparts. People who eat meat daily have approximately three times the colon cancer risk compared to those who rarely eat meat, according to a Harvard study. The recently released documentary Forks Over Knives studies how removing animal-based and processed foods from one’s diet can have a profound impact on one’s health.

Nourish yourself and fight disease from the inside out. Pile your plate with fiber-rich fruits and veggies and add anti-angiogenesis foods to your meals. Why not fill your tummy with something good for you?