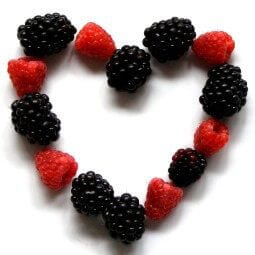 Heart researchers have found that a low-fat vegan diet is the best diet for lowering cholesterol levels. Plant foods contain no cholesterol, whereas meat, eggs, and dairy products contain large amounts of cholesterol and saturated fats, which can cause arteries to become hard and clogged. Plus, the high fiber content of a vegetarian diet helps eliminate excess cholesterol from the digestive tract. (Meat, dairy products, and eggs have no fiber at all.)

Dr. William Castelli, director of the famous Framingham Heart Study (the longest-running clinical study in medical history), says about heart disease, “If Americans adopted a vegetarian diet, the whole thing would disappear.” He states that Americans have been “brainwashed to eat meat.”

Even if you’ve been diagnosed with atherosclerosis, there’s still hope. Dr. Dean Ornish has demonstrated that the disease can be reversed without exposure to drugs and their often dangerous side effects.

In a landmark study, he put a group of patients on a low-fat vegetarian diet and prescribed moderate exercise. Within a year, the plaques that had been growing in their hearts for decades actually started to dissolve. Patients’ chest pains disappeared, and their cholesterol levels dropped.

Nearly 80 percent of people with severely clogged arteries who follow the Ornish program for at least a year are able to avoid bypass surgery and angioplasty. Says Dr. Ornish, “I don’t understand why asking people to eat a well-balanced vegetarian diet is considered drastic, while it’s medically conservative to cut people open or put them on powerful cholesterol-lowering drugs for the rest of their lives.”

Although eating fish has been promoted because it contains omega-3 fatty acids, fish flesh is often contaminated with dangerous levels of toxins such as mercury and PCBs. (To get the benefits of omega-3s without being exposed to the toxins in fish, eat ground flaxseeds, flaxseed oil, walnuts, and vegetarian DHA capsules.)

When you choose vegetarian foods, you naturally and safely lower your risk of heart disease and other serious illnesses. Order a free copy of PETA’s “Vegetarian/Vegan Starter Kit” and start on your way to a healthier heart!