The following article was written by Lauren Gordon.

Passover is a Jewish holiday that celebrates the freeing of the ancient Israelites from slavery in Egypt. Observed for eight days, Passover commences with a traditional Seder dinner on the eve of the first full day. During a ritual Seder service that accompanies the feast, the story of the Israelites’ slavery and consequent liberation is retold. As I prepare for my own family’s Seder and contemplate the meaning behind Passover, I am reminded of the slavery that is taking place today—on America’s factory farms.

Learn more about celebrating a compassionate Passover and creating a vegan Seder meal.

Animals raised for food on today’s factory farms are treated as mere commodities and deprived of the opportunity to express their natural behaviors. Chickens on factory farms spend their entire lives crammed into tiny wire cages. Each hen has an area smaller than a piece of notebook paper to stand in, without enough room to spread even one wing. Cows raised for food on factory farms are branded with scorching hot irons, have their horns cut or burned off, and are castrated—all without any painkillers. Thousand of cows are crammed together on mud- and feces-filled feedlots. They’re fed extremely unnatural diets, including large amounts of antibiotics, to fatten them up and ward of infections that are caused by their horrific living conditions. When it comes time for slaughter, cows, chickens, and pigs are loaded onto trucks and face a long journey, which often lasts several days, through all weather extremes, without any food or water. Upon arrival at the slaughterhouse, many cows are too sick or frightened to walk and are dragged from the truck by chains or prodded and beaten until they get up. This is often the first time that these animals ever breathe fresh air or feel the warmth of the sun on their skin.

Passover celebrates liberation, and I choose to omit meat from my Seder and dinner plate in order to avoid infringing on another’s freedom (in this case, animals on factory farms). With so many alternatives to using animals at the table, from replacing the traditional lamb shank on the Seder plate with a beet to creating vegan versions of traditional Jewish recipes, it’s easy to celebrate compassionately. My favorite Passover treat is Matzo Brittle—a sweet and festive way to end the meal. Try out this recipe below from VegKitchen: 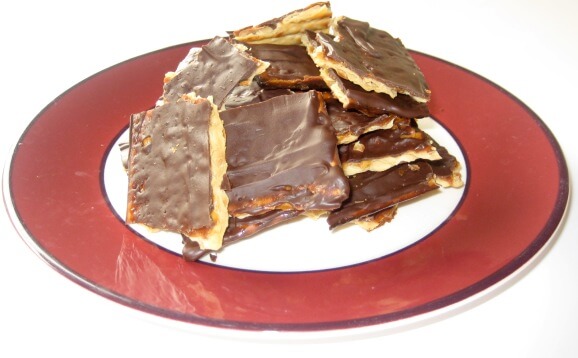