How to Host a Vegan Seder, by Comic Carol Leifer

Funny lady Carol Leifer has been making us laugh for a long time as a stand-up comic and writer for shows like Saturday Night Live and Seinfeld (she is even said to be inspiration for the character of Elaine Benes).

Being that Carol is both Jewish and a compassionate eater, who better to show us how to make a Seder dinner plant-based? She came to the Bob Barker Building in Los Angeles to walk us through the vegan elements for a compassionate, festive holiday dinner.

Passover is a universal story of dignity, hope, and freedom, beginning with traditional Seder dinners on the first two nights. During the Seder ritual, the story of the Israelites’ slavery and consequent liberation is retold–teaching that all suffering matters and freedoms should be celebrated.

Since the holiday celebrates liberation, choosing to omit meat from a Seder dinner avoids infringing on others’ freedom—in this case, animals raised for food. Farmed animals are confined and slaughtered in cruel ways and denied everything that is natural and important to them. The Passover Haggadah (prayer book) calls on us to be kind to those who are now oppressed, and to deepen our commitment to liberty today.

If you are looking for more inspiration in celebrating a vegan Seder, you’re at the right place! Check out our guide to keeping a vegan Passover. We have recipes for all of the dishes Carol makes such as vegan matzo ball soup, eggplant gefilte fish, and more! 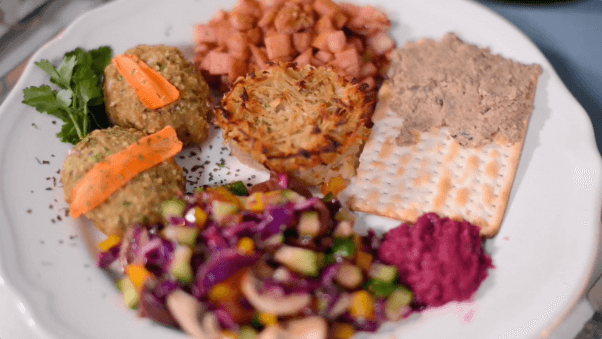 With so many cruelty-free ways to celebrate, from replacing the traditional lamb shank on the Seder plate with a beet, to creating vegan versions of traditional Jewish recipes (egg-free kugel is real!), it’s easy to celebrate compassionately.

What better time than Passover to extend our compassion to every living being? A vegan lifestyle does just that–every day–by not exploiting animals for meat, eggs, or dairy products.