The following article was written by guest writer Sean Collander.

Vanilla bean ice cream with chocolate-covered potato chip clusters topped with a salty caramel swirl: If that doesn’t make your mouth water, you should check your pulse because there’s a good chance that you’re a zombie.

I have been craving a taste of Ben & Jerry’s “Late Night Snack” ice cream ever since it was announced this past spring on TV’s Late Night With Jimmy Fallon. But since I don’t consume dairy products, I decided to create a vegan version.

What follows is a relatively easy, two-part recipe for what I call (drum-roll, please) …

Midnight Madness (of Deliciousness, That Is) 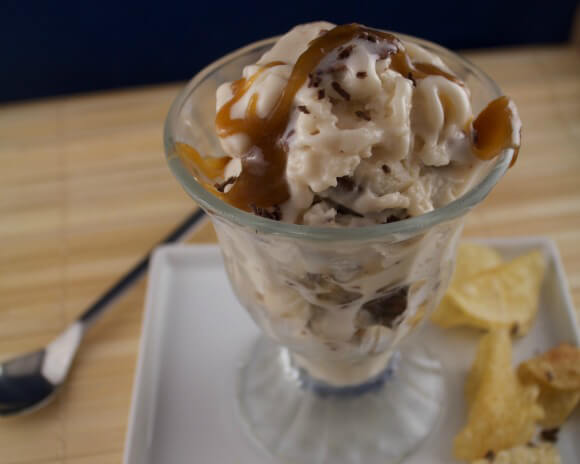 We start by making the caramel sauce*.

*You will have extra caramel sauce. To find different uses for it, check out the original recipe.

Now that the hard part is out of the way, let’s move on to the fun, messy part!

I’m pretty excited about this recipe. It’s fairly easy to make, and it tastes crazy-good. Now, I challenge you to go out and veganize your favorite dessert named after a late-night comedian. Just don’t forget to come back here and share it so that I can enjoy it too!