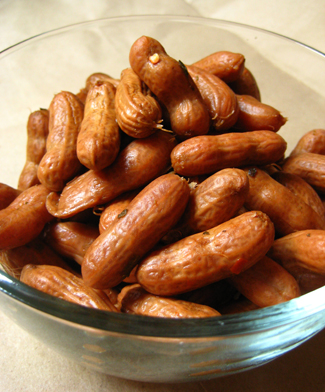 Many northerners have been shocked, and somewhat horrified, to find that many southerners actually love the taste and texture of boiled peanuts. My fiancé is one of them. He says that the texture was the hardest—or rather, softest—thing for him to warm up to. But he, like many, eventually came around. I, on the other hand, was raised on the salty snack by my dad. Boiled peanuts have always been one of his favorite foods and he is one of the few people I know who actually make his own at home, so it was inevitable that I, too, would love them.

During the summer in the South, you can find many stands along the side of the road that offer boiled peanuts by the bag, and they most commonly come in two varieties—plain and Cajun. Plain boiled peanuts are great on their own when cooked very well done and with gobs of salt, but Cajun peanuts are really where it’s at.

Boiling the peanuts with Cajun seasoning (I recommend Zatarain’s Crab & Shrimp Boil, but you can experiment with others) for hours really infuses the flavor, and the extra red pepper flakes kick up the heat. You can always omit the red pepper if you’d like. The result of the long cook time is a soft peanut with a texture similar to a cooked bean and loaded with spicy Cajun flavor. And with each peanut you crack open, you may find a small amount of the briny, spicy juice inside as special treat.

•Rinse the peanuts very well under cold water, then place in a large pot.

•Add enough water to almost fill the pot, the salt, the Zatarain’s seasoning, and the red pepper, then bring to a boil over high heat.

•Cover, reduce heat to medium-high, and boil for 3 to 4 hours, or until the shelled peanuts are soft. Add additional water to the pot throughout the cooking process, if necessary.