Ever wondered what the leafy vegetable hanging out in your Chinese food is? Well, there’s a 99.9 percent chance it’s bok choy. But Chinese cabbage (also known as bok choy) isn’t used exclusively in Chinese food—it’s also quite common in Korean, Thai, and Japanese cuisine.

I’m unaware of bok choy used in any non-Asian dishes, though, which is really quite surprising considering how common greens are worldwide. Why not try bok choy coleslaw, slow-cooked bok choy, or creamed bok choy?

The recipe below can be considered the Thai version of creamed bok choy, which uses coconut milk to achieve the creamy goodness. The chilies in this might make the dish a little too spicy for most, so feel free to reduce the number. Enjoy! 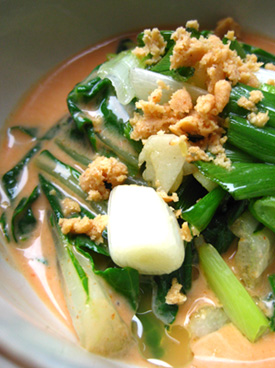 •In a small bowl, stir together the lime juice and soy sauce. Gradually pour in the coconut milk while stirring continuously. Set aside.

•In a pan over medium-high heat, add the oil and then the chilies. Stir-fry for 2 minutes. Add the garlic and scallions and stir-fry for an additional minute. Remove from the heat and set aside.

•Bring a large pot of water to a boil and add the bok choy. Cook for 30 seconds, then remove and drain.

•In a large bowl, combine the cooked bok choy with the dressing and top with the stir-fried mixture.