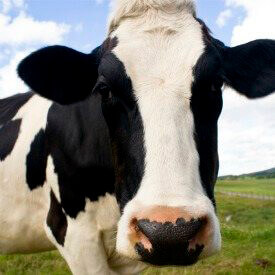 With environmental issues in the news every day, people want to know what personal changes they can make to live in a more sustainable way. “Sustainable meat” is getting a lot of media attention right now, with producers eagerly marketing their products as being good for the environment, good for animals, and good for human health. But “sustainable meat” is an answer to the wrong question: “What kind of meat should I eat to reduce my environmental impact?” Truthfully, the right question should be: “What foods are the most sustainable?”

Raising animals for food is an environmental disaster. Animal farming is responsible for 14.5% of all greenhouse-gas emissions worldwide, which, by some estimates, is greater than all of the world’s transportation systems combined. Animal agriculture is a leading cause of other serious environmental problems, like land degradation, air and water pollution, loss of biodiversity, and water shortages.

Raising animals is also an inherently inefficient way to produce food. It takes up to 16 pounds of grains to produce one pound of meat—that cow or chicken needs the extra calories for walking around and for producing non-edible body parts like bone and skin. In the U.S., up to 99 percent of all farmed animals are raised on factory farms, where these environmental problems are the most severe.

I recently attended a panel discussion on the subject of sustainable meat. The panelists included managers of pasture-based cow, pig, and chicken farms and an advocate for dining on locally raised animal products. They made a case for the sustainability advantages of pasture systems over factory farming. The manure of their animals fertilizes fields directly, rather than accumulating in large open pools that contribute to air and water pollution (although they didn’t explain why using animal manure requires that we slaughter those animals for food). Feeding animals on pasture was presented as being more green because less fossil fuel would be used than feeding them corn and soy grown elsewhere and trucking those supplies to a farm.

But the panelists never discussed the sustainability advantages of a plant-based diet. It was like attending a panel discussion on sustainable transportation where the panelists only talk about creating greener SUVs. What about hybrid vehicles, bicycles, and public transportation? The right question isn’t “What’s the best SUV to drive?” but “What is the most sustainable way to get where I need to go?”

Pasture-based animal farming does offer some sustainability advantages over factory farming systems, but at best, it only addresses a very tiny part of the problem. Americans are accustomed to eating large quantities of meat. To convert all this meat production to pasture would require more land than actually exists. And converting more land for the raising of food animals would be at the expense of the biodiversity of that land.

There’s also the issue of price. Animal products from sustainable farms are often more expensive than their factory-farmed counterparts. Some consumers have the financial resources and willingness to pay more for a greener meal, but many do not.

The panelists talked about the sustainability of food that is raised and consumed locally. It’s true that decreasing our “food miles” reduces greenhouse-gas emissions, but again, they weren’t asking the right question: “What’s the best way to reduce the carbon footprint of our food?” A study done at Carnegie Mellon University showed that not eating meat just one day a week prevents more greenhouse-gas emissions than eating only locally raised foods for seven full days.

Upton Sinclair once wrote, “It is difficult to get a man to understand something when his salary depends upon his not understanding it.” It’s hard for someone whose income depends on selling cows, pigs, or chickens for food to look objectively at the question of food sustainability. In an environmentally threatened world, what can we eat that is tasty, nutritionally complete, and sustainable, given the size of the human population?

The answer is simple: Plant-based foods.