Are We Really That Special? 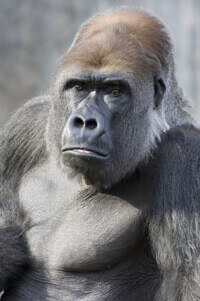 The following article was written by Lisa Towell, and originally appeared on PETA Prime.

“Humans are the only animals capable of ________.” I’ve seen countless variations on this statement in magazines, in books, and on television. Fill in the blank with anything you like: language, using tools, love, planning for the future, empathy, self-awareness, humor.

These generalizations are often wrong. Sure, it’s pretty hard to argue with “Humans are the only animals who produce reality television shows.” But let’s take a look at the often-made statement that the ability to use language is unique to humans. Koko the gorilla has a vocabulary of more than 1,000 signs in American Sign Language, and she invents new phrases to describe things for which she has not been taught a label, like “finger-bracelet” for ring. And it’s not just primates who are capable of using language meaningfully. Alex, an African gray parrot, learned to use more than 100 different words and exhibited the intelligence of a 5-year-old human. When shown two objects of different sizes, Alex could answer the question “What color bigger?” by stating the color of the larger object. Alex also understood how to count. Looking at a tray of objects of different shapes and colors, he could correctly answer the question “How many green blocks?” even if he had never seen that particular collection of objects before. And that’s just human language; of course animals have their own languages too.

Self-awareness is another favorite distinction between human and nonhuman animals. But elephants have been shown to have a form of self-awareness by passing the mirror test. In this test, the elephant has a mark placed on her face in a location where she can’t see it. When confronted with her reflection in a mirror, she repeatedly touches her trunk to the mark, indicating that she recognizes the reflection as being an image of herself.

Those of us who have lived with animals recognize the absurdity of the assertion that “Humans are the only animals who can feel empathy and love.” The attachment between mated animals, or between mother animals and their babies, is often written off as “just instinct.” Whenever I hear that dismissive statement, I think of Scarlett, the brave mother cat in New York City who rescued her kittens one by one from a fire, almost at the cost of her own life. It’s hard for me to see the difference between Scarlett’s love for her kittens and the attachment between human mothers and their infants.

The “it’s just instinct” argument doesn’t hold up when animals show emotional connections that cross species boundaries. Stories of dog and cat heroism abound, and pigs have also demonstrated courageous compassion when their human companions were in trouble. I love the story of the pig Lulu, who summoned help when her human companion suffered a major heart attack. Lulu ran out to the road and lay down, blocking traffic, until she was able to lead a motorist to the rescue.

I have a theory about why people feel the need to say “Humans are the only animals ….” It’s a way to set us apart, to make our species special, to show a little species pride. Sadly, this distinction is often used to justify inhumane treatment of animals. Some people believe that it’s OK for an animal to suffer since he or she is somehow “less than” a human. Of course there are many differences between human and nonhuman animal species, but not all of those differences are flattering to us: “Humans are the only animals who commit genocide.” Or consider the many talents that humans don’t possess, like a whale’s echolocation, a dog’s exacting sense of smell, or a bird’s ability to navigate using the Earth’s magnetic field. And here’s one thing that all animals, human and nonhuman, do have in common: We all want to avoid suffering and live happy lives.