Must-Read Exposé on Animals in Entertainment Now on Kindle 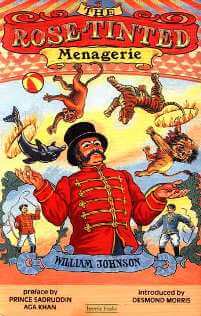 UPDATE: Iridescent Publishing is offering the Amazon Kindle edition of The Rose-Tinted Menagerie—A History of Animals in Entertainment at a special reduced price of $2.99, plus sales tax/VAT (down from $6.99), during the Black Friday Deals Week sale (from November 19 to 25). Get your copy today!

The following article was written by Jennifer O’Connor.

Great news: The unabridged, fully illustrated version of The Rose-Tinted Menagerie has just been republished as an Amazon Kindle eBook. Investigative journalist William Johnson’s exposé of the miserable lives and premature deaths of animals used and abused in circuses, aquariums, and zoos remains as important today as it was when it was first published in 1990, when dolphins were forced to perform “striptease” shows at the Moulin Rouge in Paris and elephants were battered with sledgehammers to subdue them during circus training.

Johnson traces circuses’ roots back to ancient Rome, when animals were sometimes slaughtered by the hundreds in gladiatorial contests—and notes that animals are still being slaughtered today, although in a more subtle manner. Dolphins and orcas are stripped of their freedom and dignity and die far short of their natural lifespans at theme parks such as SeaWorld. Elephants are confined to chains sometimes for days on end—leading to life-threatening leg and foot diseases—and bullhooks are now the weapon of choice to break their spirits.

The Rose-Tinted Menagerie explores the avarice and archaic attitudes that have driven the proliferation of the use of animals in entertainment and the pathetically inadequate laws that “protect” these animals. This thought-provoking book is a must-read. Order your copy today.