Getting Personal With Anglers 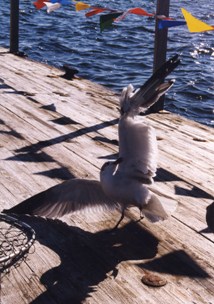 Not long ago, while walking my dogs at Chicks Beach in Virginia Beach, Virginia, I noticed some commotion up ahead of me. As I approached the couple and their dog, I asked, “Is everything OK?” It turned out that they had found two birds―one dead and one alive―tangled up together in fishing line. They had removed as much of the fishing line as they could from the living bird and then, wanting to get back to their jogging, had stashed the bird, who couldn’t seem to fly, in some tall grass. I knew that that was a bad idea―many dogs frequent this beach, and the bird was likely to get mauled by one of them or else die of thirst. So I went and found the bird, and seeing what bad shape she was in, took her to be euthanized.

The experience was very depressing, and I couldn’t stop thinking about it. It’s bad enough that anglers kill fish on purpose and in such a cruel way―must they also kill birds and other animals in an equally horrendous manner?

I did a little poking around online and found out some shocking statistics: Apparently, more than a million birds die each year because of fishing debris. And marine mammals are not exempt, either. Each year, approximately 100,000 of them, including dolphins and manatees, are killed by fishing line and related paraphernalia. How can we be allowing this?

The next time I was on the beach, the sight of an angler took me right back to those dark thoughts. I approached him. Diplomacy has never been my strong suit, and though I always try to remain calm, I’ll admit that I have had many verbal confrontations with strangers at dog parks over what I consider to be unacceptable treatment of their dogs. But I had never tried having a discussion about animal rights with an angler on the beach before. I’ve always wanted to address anglers because I see so many of them and they’re killing animals right in front of me, but up until this point, I’d never been able to come up with a way to start the conversation.

I said, “Hi! How’s it going?” He replied with a casual remark. Then I said, “Hey, could I tell you something that happened to me recently?” He was all ears, so I proceeded to tell him the story of the two birds tangled up in fishing line and express my sorrow about what had happened. To my amazement, the response was very positive and polite! He assured me that he never leaves fishing line behind and very much disapproves of anglers who do. I thanked and praised him for being so conscientious and went on my way.

After a few similar encounters with other anglers, I felt emboldened to add, in an offhand manner, “I actually would be even happier if you didn’t kill any fish, either, but at least we need to protect birds from being killed inadvertently.” This comment didn’t necessarily get any of the anglers to put down their fishing rods, but at least it planted a seed―the notion that a normal, pleasant, caring person actually considers it wrong to kill fish.

I plan to continue this personal outreach to anglers. It’s easy and nonthreatening, and I hope it will prevent some suffering―of both birds and fish.