Do not miss the new documentary film PlantPure Nation. It proves that people in all communities—even rural farm areas—are receptive to wholesome plant-based meals. It also proves that the apple doesn’t fall far from the tree. In the film, Nelson Campbell, Dr. T. Colin Campbell’s son, works with Kentucky State Rep. Tom Riner—who went vegan after reading The China Study by Dr. Campbell—to promote the health benefits of a plant-based diet.

The pair plans to establish a two-week healthy-eating pilot program in an underprivileged Kentucky county that Mr. Riner represents. If the program is successful, they’ll roll out similar programs throughout Kentucky—a state with one of the worst obesity rates in the country.

Kentucky legislators support the program at first, but—spoiler alert—representatives from the meat and dairy industries start whining and ultimately railroad it.

But don’t worry. Nelson is undaunted and sets up a pilot program on his own, without the help of any politicians, and closer to home. He finds a small office in Mebane, North Carolina, a small town of about 12,000 residents, many of whom eat meat and other unhealthy animal-based foods, and initiates his PlantPure Jumpstart Program. 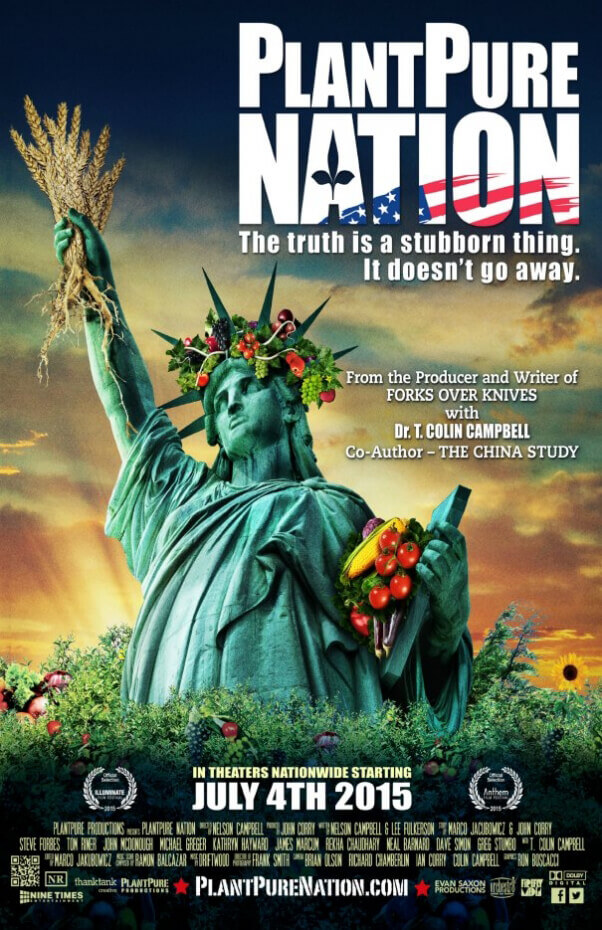 He walks from business to business, starting at the local coffee shop, and quickly recruits about 20 people, including a journalist, a politician, and even a cattle farmer, who all promise to eat plant-based foods for 21 days.

Overall, everyone is pleased with the program—and happy to see their cholesterol levels plummet. In fact, the program is so successful that a local businessperson introduces it at his company, and Nelson has to look for a bigger kitchen to prepare the vegan meals.

The final number of participants, after just six months and five “jumpstart” sessions is—well, I can’t give everything away. You’ll just have to see the film for yourself. Check to see if it’s coming to a theater near you, rent it, purchase it, and share it. Seriously, it’s a really motivational movie. Remember that cattle farmer? His triglyceride levels dropped from 153 (at risk) to—well, yeah, see the movie.

It’s important to note that Nelson could easily have gone straight to Mebane and never even tried to pass a health bill in one of the unhealthiest states in the country, but this effort underscores an important part of the movie’s message: that the meat, egg, and dairy industries have politicians in their back pockets and that these politicians will vote against any legislation that threatens those industries, even if it’s in the best interests of their constituency. So don’t wait for legislators to do the right thing. Do it yourself.

And never give up. Nelson wasn’t finished with Kentucky. He went back to re-engage the legislators, armed with information about his program in North Carolina. He and Rep. Riner put their “pro-plant” legislation into another bill that seemed certain to pass—until they attempted to add this shocking language:

Numerous scientific studies now confirm that a whole foods diet comprised primarily of vegetables, fruits, grains, legumes and nuts without added oil, sugar and salt is optimal for human health, not only preventing a broad range of diseases and illnesses, but also reversing some of the most dangerous chronic conditions. This finding is of the highest importance to the commonwealth because it communicates a truth that has the power to save lives.

Oh, c’mon, you might as well come right out and say that kale is good for you or something outrageous like that. The bill was defeated.

Nelson was not. He held a rally, screened PlantPure Nation, and shared his vision with the packed arena: Kids grow up healthy, we age gracefully instead of wasting away in nursing homes, small family farmers become the foundation of our food farming and distribution, we no longer raise billions of animals for slaughter in inhumane conditions out of sight of the public eye, and we restore the world’s climate, forests, and topsoil.

Sound good to you? Then see PlantPure Nation to learn how to turn this vision into reality.