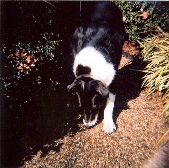 The following was originally posted on PETA Prime by Elizabeth Bublitz.

For a few years now, cocoa bean mulch has been available at numerous garden centers.

Many homeowners are using it in lieu of wood mulch because it has a longer shelf life and it is very attractive. However, cocoa bean mulch contains methylxanthines—specifically caffeine and theobromine, which dogs are extremely sensitive to.

Dogs are attracted to the chocolate scent of cocoa bean mulch and are very likely to eat it. If ingested, cocoa mulch can cause your dog to tremble and vomit.

If a large amount is consumed, dogs can become hyperactive and have a rapid heart rate, seizures, and diarrhea. While unlikely, the consumption of cocoa mulch can be fatal to dogs. It can also be harmful to cats (although they are less likely to be attracted to the chocolate aroma) and other wildlife as well.

If you feel your dog has ingested cocoa mulch, contact your veterinarian or pet poison control (1-800-213-6680) immediately.