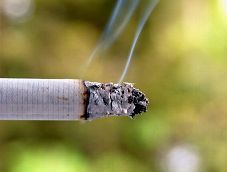 Smoking isn’t just bad for people; it harms our animal friends as well.

Researchers at the University of Massachusetts and Tufts University School of Veterinary Medicine have found that cats who live with smokers are more than twice as likely to suffer from feline lymphoma, and population studies suggest that environmental smoke may increase the risk of nasal and lung cancer in dogs. If that doesn’t prompt smokers with animal companions to quit, I don’t know what will.

Fortunately, a study conducted by the Henry Ford Health System Center for Health Promotion and Disease Prevention suggests that many smokers with animal companions would butt out cigarettes if they knew that they were putting their dog’s or cat’s health at risk. Nearly 3,300 people participated in an online survey aimed at determining if smokers would change their behavior if they knew that it harmed their animal’s health. One in five of the people who took the survey smoked, and more than one in four lived with a smoker.

Of the smokers, one in three said that knowing that smoking was bad for their animal’s health would compel them to kick the habit. Nearly one in 10 people would ask a partner to quit, and one in seven would ask their partner to smoke outside. It’s a start, at least. No one should put their best buddy’s health in danger—ever.

If you care about animals, you really need to stop smoking, pronto. Do it for yourself, all your loved ones, and animals in laboratories too. Companion cats and dogs aren’t the only animals who suffer when people smoke. Mice, rats, dogs, primates, and other animals are mutilated, pumped full of nicotine, and forced to inhale smoke in cruel laboratory experiments to “test” the effects of smoking.

Help Animals Breathe Easier This information should light a fire under all caring individuals, and if you smoke, it should give you even more incentive to stamp out cigarettes once and for all. It may not be easy, but your beloved animal companions—and animals suffering in laboratories—are counting on you to quit. Learn more about the effects of secondhand smoke and companion animals.