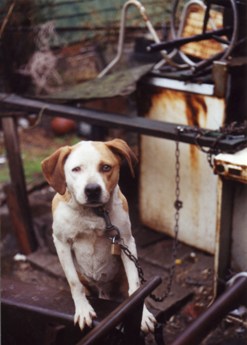 The following is a guest article written by animal welfare reporter and activist Deborah Kay Steinken.

Being a domestic violence counselor has made me realize that victims need to be more informed and aware of the help and resources available regarding safe havens for animals, foster care for animals in violent homes, and local humane societies that work with animal victims of domestic violence.

Companion animals living in abusive homes can’t scream for help and don’t have the choice to leave. They are usually the first to be victimized, as abusers understand and exploit the deep bond between animals and family members. Abusers use threats of violence against animals to prevent many human victims from leaving the home. This only prolongs the high risk of serious injury or death to all involved.

Even though FBI profilers, psychiatrists, and law-enforcement officials have documented that violence toward animals is one of the traits that regularly appear in the records of serial killers, rapists, mass murderers, and perpetrators of domestic violence, animals still remain the least protected and most forgotten victims. Doesn’t it make sense that when there is violence in a family, everyone from animal control to family advocates to the court system should consider all vulnerable victims, including animals?

If you need help, contact your local humane society, animal control agency, or veterinarian to see if they have temporary foster-care facilities for the companion animals of battered women.