How Rowdy Got His Groove Back 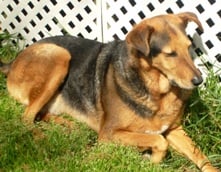 I first met sweet shepherd-mix Rowdy when he was 5 years old and belonged to my neighbors. Two of my three dogs had died in quick succession, and the remaining 11-year-old husky, Darby, was sad and lost.

So I started bringing Rowdy over to the house to play and go for walks with Darby and even spend the night on weekends. Rowdy was very playful and would eat anything I put in front of him. The two of them got along really well and even spent the Christmas holidays together. This lasted about six months or so, but, as fate would have it, Darby got cancer and soon became too ill to play. Then he, too, passed away.

After that, I moved away to a neighboring town and didn’t think I would ever see Rowdy again. Fast-forward two years, and I got a phone call at work from my old neighbors they had tracked me down at PETA. They were having babies, and they wanted to find a new home for Rowdy! I was astonished that they could even think of giving up this wonderful dog, but I replied, “You called the right person.”

By this time, I had two new dogs, but I felt sure that we could make it work. So Rowdy moved in. Well, it wasn’t long before his personality changed. He became a picky eater and started looking depressed. He had been raised from a puppy in his first home, and I think he just missed his first family very much. I tried to get his old family to come and visit him, they were only 20 minutes away,but they stopped returning my calls.

I thought that with plenty of TLC, Rowdy would get over it after a few months, but things actually got worse. Eventually, he also developed some pretty serious health problems that certainly didn’t help matters. He went through a surgery for a bladder stone, and then he just stopped eating altogether. He ate not one bite of food for a solid week. It was frightening. I thought I was going to lose him.

For serious and chronic health problems, I always turn to my favorite holistic vet, Dr. Monique Maniet, in Bethesda, Maryland. She prescribed a homeopathic remedy and some nutritional supplements to pull Rowdy back from the brink, and his physical health did indeed start to improve. However, he still looked depressed all the time, like he had just lost his best friend. I took him to work with me, and everyone noticed it. People called him a “sad sack.”

Finally, Dr. Maniet went to a conference in the U.K. about homeopathy, and there she discovered a new homeopathic remedy that was deemed especially helpful for anyone who has emotional baggage that will eventually lead to cancer if not dealt with. For those of you who aren’t familiar with homeopathy, it’s a strange type of medicine, discovered and developed in Germany in the 18th century, but once you’ve seen how effective it can be, you stop caring about how strange it is.

The way it works is similar to vaccination. You take an extremely diluted dose of a substance that would normally cause the symptoms that you are experiencing, and this stimulates the body to correct those symptoms. Sort of like “hair of the dog” if you wake up with a hangover, drink some of what caused the hangover and you’ll feel better. (I have no idea if that actually works.)

But with homeopathy, the doses are infinitesimal, so you’re really dealing more with the energy of the substance than with the actual physical substance itself. (I wasn’t kidding about the strangeness of this type of medicine!)

Anyway, so I gave Rowdy three doses of this new remedy over three days last year, and the sudden change in him was absolutely phenomenal. No longer was he a sad sack! He became engaged in what was happening around him, and he started wagging his tail often and really hard. The difference in him today is like night and day, pretty much a miracle. But then, you often get miraculous results with homeopathy. I’ve seen it before.

However, the moral of this story isn’t necessarily about homeopathy (although it’s certainly worth looking into, for best results, consult a professional veterinary homeopath). The moral of the story is this: If your dog is suffering from an emotional or psychological problem, it should be taken just as seriously as a physical problem.

Like us, dogs are sensitive and susceptible to depression, anxiety, phobias, and other emotional disturbances, so no stone should be left unturned until a solution is found to correct the problem. And don’t be afraid to try remedies and treatments that you might be unfamiliar with.

There are oodles of them out there, and as a holistic-medicine aficionado, I can attest to the fact that many of them work just as well as, if not better than, conventional medicine. Plus they’re usually much less invasive, and they have fewer, if any, side effects. So give the unconventional a try, anything for our canine companions, right?