U.S. Olympic water polo captain Tony Azevedo has always considered himself a “dog person” and never really considered adopting a cat—that is, until he saved a cat’s life. 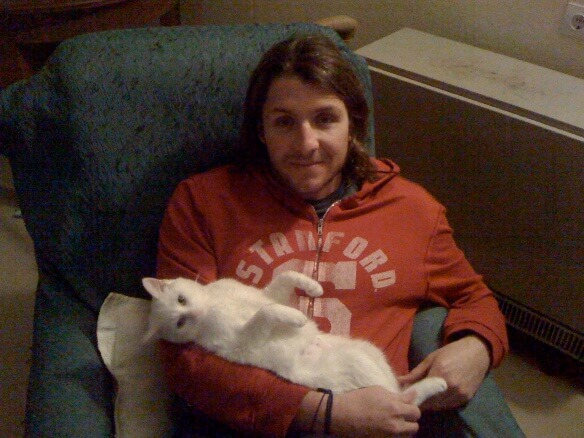 For the last two years, Azevedo has lived in Montenegro playing professional water polo. He says one of the first things that he noticed about the area is how many stray animals there are, especially cats. While there, he and his fellow polo players took to the animals and grew to love them, but they knew that it was only temporary care—as traveling athletes, they couldn’t take the animals on the road.

But then something unexpected happened: Azevedo and his friends heard that some kids had thrown a white kitten into the sea and left her to drown. Azevedo, who has been dubbed “The Savior” in his professional life, leapt into action, proving that his nickname is well earned in more ways than one. Luckily, the kitten was rescued.

Although it seemed difficult to adopt her, Azevedo knew that he wanted to bring the little kitten with him. Ever since, she’s traveled with the team around the U.S., to Mexico, and back and forth to Europe. Azevedo’s experience in Monte Negro changed his life.

“Snow enriches my life in so many ways I never thought possible,” he told PETA. “I always though cats were aloof and unloving, but Snow is the opposite. She sleeps with us in our bed and loves curling up on my chest for warmth. When I get home from practice, she is at the door waiting for me, and meows loudly if it takes too much time for me to open the door.”

The experience also caused him to think more about the problem of animal overpopulation.

“I have been aware of the issue of animal overpopulation for a long time, probably because growing up, my family made a point to always adopt all of our dogs from shelters,” he told PETA. “But living in Montenegro really put the problem into perspective, because not only is there a monumental overpopulation issue there, the government does very, very little to contain the problem or educate the public.” Stray and desperate animals are everywhere, he says, so it’s not a problem that’s easily overlooked.

Here in the States, the problem bothers him, too.

“I don’t understand why humans think they have the right to breed more and more animals, when we already have so many that need to be taken care of,” he says. “We domesticated animals, and they depend on us for their existence. We have a responsibility to take care of them and to provide them with safe and loving homes.”

Azevedo says that living overseas, he learned a lot about how to look out for animals. “If you are traveling abroad and recognize an animal problem or witness disrespect of animal rights, make your concerns known to the local tourist board or government,” he explains. “Make calls, write letters and blog online about what you have seen and experienced. Many governments depend on tourism as their main source of revenue, and if tourists are unhappy about something, that is an impetus for them to do something about it.”

He also encourages people to speak up on social media and to take the time to educate children. “One of the things I noticed while living overseas is that many children have learned from the older generations that animals do not have rights and can be treated like garbage,” he says.

If an Olympic athlete has the time to show an animal love and care, there’s hope that anyone can. It’s just a matter of getting the word out about animal overpopulation. “If this cycle of lack of education can be broken, there is a much better chance that animal rights will eventually be respected globally,” says Azevedo.

We think Snow would agree.