If You Love Your Cat, Keep Her Inside 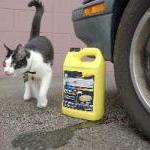 The following post was originally posted on PETA Prime by Paula Moore.

I recently read a heartbreaking story about a cat named Hadley who had been deliberately set on fire. Hadley suffered painful third-degree burns on his face, ears, neck, back and legs. A photo in a Michigan newspaper shows Hadley’s blackened ears, which vets say will probably fall off because they are so badly burned.

The orange-and-white tabby is also missing half his whiskers, and much of his fur will likely never grow back. After the attack, Hadley’s distraught guardians found him crouched in fear outside their home. Bad things happen to cats who are left to wander outside on their own.

While many people mistakenly believe that their cats “need” to go outside to be happy, if you want your feline friend to live a long, healthy life, the best thing you can do is keep her safely inside with you. What happened to Hadley is far from an isolated incident. Random acts of cruelty are common, and the more than 300 new cruelty cases that PETA hears about every week mostly involve animals who were victimized after they were left outside unattended.

In June, cat guardians in two suburban Florida neighborhoods were shocked when their beloved companions began turning up dead and mutilated. Many of the cats had been gutted and skinned. Some were missing limbs. At least 19 cats were killed before police charged a local teen with the crimes. Outside cats have been beaten, kicked, hanged and shot with arrows. Some are stolen and sold for use in hideous animal experiments. Others are used as bait in dogfighting.

Even if your cat never encounters a person with cruel intentions, there are plenty of other outdoor dangers. Cats left outside may be hit by cars, poisoned by antifreeze or pesticides from neighbors’ lawns or attacked by a dog or wild animal. Last year, I adopted a 5-year-old former stray from a local Siamese cat rescue group. When Mochi was first picked up by local animal control officers, he had a nasty wound on one of his back legs that had most likely come from a dog attack. To this day, Mochi’s leg gives him trouble, and he sometimes stumbles when he tries to run or jump.

Cats allowed to roam outdoors are also much more likely to contract devastating diseases such as feline leukemia, feline AIDS (FIV) and feline infectious peritonitis (FIP). Or they become infected with tapeworms, Giardia and other parasites. Mochi had roundworms when I adopted him – which I discovered when he unceremoniously deposited one on my bedroom rug. Trust me, you don’t want to see your cat hacking up a still-wiggling, 3-inch-long worm.

I do understand why some cat guardians are tempted to let their cats go outside. Mochi has lived with me for more than a year now, and he still occasionally sits in front of the door and howls – in that special way that only Siamese cats can – hoping to be let out. But I simply remind him that there is no dinner bowl outside (when animal control found him, he was little more than skin and bones) and distract him with the Cat Charmer or a toy mouse. He soon forgets all about going out.

By setting aside daily “cat quality time” to play with your cat and providing lots of diversions – including access to windows, perches, catnip gardens, scratching posts and tons of toys – you can keep your cat purrfectly content in your home. So, please, if you care about your feline, help him or her live to a ripe old age in the safety and security of the great indoors. And if you ever are tempted to let your cat go outside unsupervised, just think of poor Hadley and his burned ears.

Today’s concrete jungles are simply no place for our feline friends.