Do We Love Animals More Than Humans? 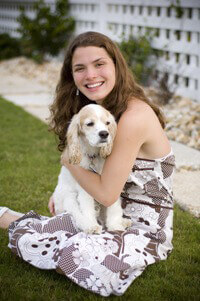 The following article was written by Dr. Barry Kipperman, and originally appeared on PETA Prime.

Each of us could easily recite the myriad reasons that our animal companions hold such a special place in our hearts. A common argument levied against animal activists suggests that we prefer animals to people. Rhetorical questions such as, “If you could only save a baby or a dog from a burning building, who would you choose?” come to mind. These types of questions serve to obscure the real issue: that our societal treatment of animals is in dire need of improvement.

Fortunately, having to choose between “the baby or the dog” seldom occurs in real life. But maybe there is more than a sliver of truth to the argument, as evidenced by the responses to a blog, “Cat vs. Spouse.” I suspect that if I had to choose between spending the next year on an island with either 10 random humans or an equal number of dogs and cats, I’d be looking for dog and cat food. It would be my version of Survivor!

On some level, I find this a sad reflection on the nature of my relationships with humans, and I acknowledge that I’m simply more comfortable around animals than I am around people. People have on numerous occasions caused me to feel disappointment and betrayal. I can seldom recall feeling let down in a similar manner by an animal. Maybe we simply expect more from people than we do from animals. I don’t expect a birthday card each year from my dog, Winston, and I don’t recall Lilly, my cat, saying “Thank you” for her new toy. Are our impressions of animals misplaced because our expectations of them are simply not as great? I suggest quite the opposite.

I believe that animals are devoid of all of the malevolence that people inflict on each other. In my view, animals are never deceitful, dishonest, manipulative, or malicious unless they are severely provoked or are in the wild, where Darwinian influences matter. OK, Winston may try to convince me that I forgot to feed him, but that doesn’t count. Animals are often able to forgive humans for unspeakable treatment. I can’t imagine that animals would ever take up hunting humans simply to entertain themselves, yet hunting remains a popular “sport” among humans.

I recall feeling livid years ago after seeing one of Eddie Murphy’s Dr. Doolittlemovies. I realized it was because he imbued all the animal characters with the aforementioned odious human qualities, which he apparently thought that we would find humorous. His characterization of animals behaving more like people violated my lofty beliefs. It revealed an ugly world similar to the one James Stewart saw in It’s a Wonderful Life had he never been born.

In conferring animals with the best of intentions, I take a leap of faith. Although I don’t use the word “faith” often, perhaps my feelings regarding the inherent goodness of the spirit of animals are akin to the faith that others may have in a deity or higher power. I believe this knowing that my theory can never be disproved. My trust in animals softens the harshness and disappointment that my interactions with humans occasionally bring. It is my hope in my daily work as an animal doctor that I honor that trust and express my gratitude to them for their enrichment of the world in which those of us blessed to know animals live.