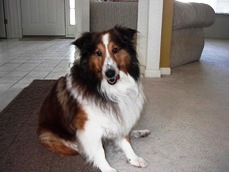 I really like my neighborhood and the people in it. It’s a friendly place, and no two houses look alike. Many people know each other, and I’ve met lots of people who have lived in my neighborhood for 30 or 40 years―some have even built their own houses. The one thing that I don’t like is the way some of my neighbors treat their dogs. Their misguided approach to dog care is taken mainly out of sheer ignorance, not malice, yet it causes a lot of suffering.

Here is a rundown of some of the dog-care disasters that have taken place in my neighborhood just in the four years since I’ve lived there:

• Do-it-yourself ear-cropping. One of my neighbors took scissors to his dog’s ears when she was a puppy. He just cut the ends off, so now her ears hang over her forehead like bangs. I’ve run into numerous people in my area who think that puppies don’t feel pain so therefore it’s OK to hack off their tails or ears. It’s not even illegal in Virginia. But it should be.

• Providing no water and no relief from the heat on hot days. My former neighbors had a lovely, sweet sheltie with a very heavy coat. I was shocked when I discovered how matted he was and, worse, how bone-dry his water bowl was during the height of the summer heat! I managed to rescue this dog, but not before his kidneys had been damaged by a raging infection that had gone unnoticed. Also unnoticed: heartworms and hookworms and a dewclaw that had curled around and embedded itself in the dog’s toe. This kind of neglect is common in dogs who are forced to live outside, under the family’s radar. The man taking responsibility for this dog actually believed that you only have to take your dog for one initial vet appointment, and then the dog is good to go for life.

• Failing to provide dog food. By chance, I met some neighbors who were trying to find homes for their two puppies. I asked to see them and was shocked at how thin they were. I was told that the family had no money to buy dog food, so I took them some dog food to tide them over. When I went back 24 hours later, I was again shocked to see that the cans of food that I had donated to them were still sitting on a shelf in the living room! After receiving that wake-up call, I notified the authorities to come get the puppies. I still can’t explain that astonishing neglect, other than that it may have been caused by mental illness.

• Chaining dogs for long periods. In my community, perpetual chaining has been banned (thanks, PETA!), but people still attempt to do it. One neighbor chained two dogs outside with no shelter during a nor’easter! I recently called animal control on some of my neighbors who were chaining their two dogs on very short chains in their carport. So how did the neighbors respond? They just put up a privacy fence in front of the carport, I guess to hide the continued chaining and to discourage busybodies. Ha! They don’t know me (busybody extraordinaire!).

• Fencing that doesn’t keep dogs safe inside their own yard. Especially lately in my neighborhood, there has been a rash of incidents in which dogs jump fences and run right into the street. Some of the neighbors simply shrug and say, “Well, that’s how it is when you live with a beagle,” or whatever breed they happen to have. I’m sorry, but dogs can get into big trouble, especially with cars, when they’re roaming on their own, and I sure don’t want them chasing me or my leashed dogs, either!

• Leaving dogs in crates for long periods of time. Some new neighbors moved into a big house with a big yard recently, and right away they put in a swimming pool and lots and lots of lawn ornaments and outdoor furniture and decorative plants. They have four dogs, but do the dogs get to run around that well appointed yard? No, the dogs spend most of their time warehoused in stacked crates in the garage.

• Not providing adequate shelter. Two households in my neighborhood had doghouses for their dogs that consisted of a roof, a floor, and only three sides. There was no front wall at all! I was dumbfounded when I first saw that. (Needless to say, I arranged for better doghouses for both dogs.) On another occasion, I encountered a tiny little short-haired dachshund who had been left outside for the day with no shelter when it was around 40 degrees outside! I was livid. I think the dog would have frozen to death if I hadn’t intervened.

• Neglecting to spay and neuter. One of my neighbors had an intact female dog who lived outdoors, and I kept nagging him and nagging him to get her spayed. He kept procrastinating until―you guessed it―the dog got knocked up. The puppies were born into a “family” of dysfunctional, unemployed men, and the one taking responsibility for them was too poor to afford puppy food, to buy worm medication, or to take them to the vet. He had a very hard time adopting them all out, so he settled on homes that were inappropriate, such as the one across the street from him, described below:

• Adopting a puppy out to someone who is completely unable to manage his or her own life and who possesses a total lack of information about and knowledge of puppy care. This neighbor suffers from alcoholism, has been hospitalized for heart failure and a debilitating stomach ulcer, and is illiterate. He also has a temper, smokes like a chimney, lives in a filthy, cluttered house, and doesn’t have the foggiest notion of how to train, care for, or communicate with a dog.

I know that no one reading this would ever be caught dead doing any of these things, but the point is that your neighbors might. So keep an eye on them. Don’t assume that they know as much about dog care as you do just because they seem like nice people. A lot of old-fashioned customs die hard, even though they can be shocking to those of us who have kept up with modern attitudes about dog care. Be nosy, and ask questions. A great way to meet your neighbors and to check up on their dogs is to walk your own dogs all over the neighborhood every day. People will feel comfortable speaking to you because you’ll be so familiar to them. And if you discover something awful happening to a dog, please, intervene in whatever way you think will be the most effective. You may be that dog’s only hope. So be bold and make sure that all is well in your neighborhood from the dogs’ point of view.