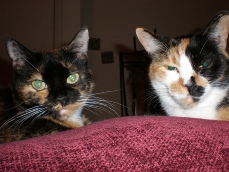 The following is a guest post by PETA staffer Christine Doré in honor of June, which is “Adopt a Shelter Cat” Month.

Three years ago, I moved into a new condo by myself and instantly felt that I needed an animal companion.

After doing some research and making the commitment to becoming a guardian to a homeless animal, I found a great local animal shelter. After discussing my thoughts and lifestyle with a shelter employee, I was introduced to a sickly 8-year-old tortoiseshell cat with big sad eyes and her daughter, who was a skinny, skittish calico with no fur on her legs (she frequently pulled it out during anxiety attacks).

My heart broke for these gentle, beautiful cats, and something behind their scared, green eyes told me that I had to bring them home to protect and love them for the rest of their lives. Both cats were missing hair on their scabby necks from flea bites, and the tortoiseshell could barely even muster a meow in her defeated state.

The shelter employee explained to me that they had come in together, along with six other cats, after being discovered in the house of a severely neglectful hoarder who had died of old age. Nobody had known how long the cats had been left in the house after the woman passed away, but after her body was discovered, the cats were turned over to the animal shelter, where they were spayed, given medical attention, and put up for adoption.

The other six cats had all been adopted out one by one over the last six months, but the shelter employees felt that they couldn’t separate these two because the daughter was far too anxious to leave her mother’s side.

I took the cats home that day, naming the sweet tortoiseshell Frances and the finicky calico Howdy. It took months for them to gain weight and begin to trust me and their new environment.

During a routine vet visit, it was discovered that Fran had severe hyperthyroidism. After a week’s worth of radiation therapy and medication, her condition began to drastically improve.

Once Fran was healthy, the two cats began settling into their new digs. It took a while for Fran to feel comfortable and learn that she could eat slowly without the fear of not knowing when her next meal would come. Howdy finally stopped crying at night after gentle attention and constant love put her at permanent ease, and the fur on her legs grew back after her anxiety calmed for good.

It’s been three years now, and Howdy and Frances are two of the happiest, most lovable, most engaging cats you will ever meet. They snuggle together every night and bathe each other every day. Howdy is extremely talkative and loves playing with toys (including bottle caps and shoe boxes, which she finds irresistible), and Fran enjoys being brushed and baking in the sun while stretched out on the windowsill.

My life has been significantly enriched by these two beautiful cats. Knowing that I was able to rescue them from such hell has truly bonded us in an unimaginable way, and I’m thankful every day that the three of us found each other.