Give Someone a Happy New Year 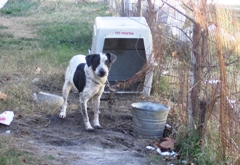 The following post was originally published by Karen on KP’s Dog Blog, December 31, 2007.

In case there is a spot remaining on your list of New Year’s resolutions, I have a good one for you. This one will warm your heart and the heart of a grateful dog. Here it is:

First, scour your neighborhood on foot or by bike to locate at least one neglected dog. Chained and penned dogs are obviously neglected, but dogs that have the run of the entire yard can be neglected too. Any dog who is left outside 24/7 is neglected.

Next, evaluate the dog’s living conditions. What kind of shelter does the dog have? How clean or filthy is the area in which the dog is living? Does the dog have water? Is it frozen or covered with algae? Zero in on Fido’s health. Does he have runny eyes? Diarrhea? Scaly or red patches of skin with no fur? A cough?

Once you’ve taken stock of the situation, take a deep breath and go see if you can make friends with the owners. Depending on your temperament, you may need to give an Oscar-worthy performance, but keep in mind whose life is at stake. If the owners have some pretty flowers in the yard, rave about them. If they have a car, mention how cool you think that model is. Anything to curry favor with the owners and win their trust.

Gradually, incrementally over time, work Fido into the conversation. Mention that you’ve been meaning to start getting more exercise and would they let you walk their dog for them? Bring along a chew toy and tell them that your own dog doesn’t want it and would their dog like to have it? Stop by with a bale of straw and say that you got it for free from a friend of yours—would Fido like to have it in his doghouse or scattered on top of the mud? Offer to put it there yourself (because they probably won’t bother). Mention that you noticed that Fido has diarrhea and you have to take your own dog to the vet anyway, so would they like you to take Fido along, too, just to check for worms? Perhaps Fido could even come to your house to play with your dogs?

Ideally, you would eventually become a trusted friend, permitted to come and take Fido to your house to play with your dogs at any time. Once you’re in that position, you can be sure that he gets everything he needs and more. And you will definitely be the person the owners turn to if they ever decide to give Fido up. But it takes patience to get there.

If you meet with nothing but negativity or even outright hostility, don’t give up. Search for ways to ingratiate yourself with the owners. If all else fails, at the very least you can stop by once a day and give Fido a treat or a dog biscuit, scratch him under the chin, and check on his water. He will deeply appreciate anything you can do to alleviate his woes. And if things are just abominable to the point of being illegal and you can’t get anywhere with the owners, call the authorities. Notify the local animal control department, the nearest SPCA, the newspapers, or even PETA. Just do something. You are that dog’s only hope.