Fleas Aren’t Funny, but Neither Is Poison 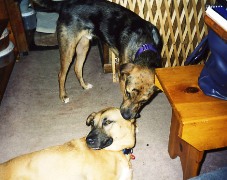 The following post was originally published by Karen on KP’s Dog Blog, May 29, 2008.

About 15 years ago, I was prescribed an antibiotic that had the unfortunate side effect of making me extremely itchy all over my entire body. It was truly unbearable and lasted for a couple of days. I would definitely categorize that experience as “torture.”

So now, whenever I see an itchy dog, I take it very seriously. Canine itching can have numerous causes, but probably the most common one by far is fleas. Some dogs can be crawling with fleas and not even scratch, while others become completely overwhelmed with itchiness from a single flea because they’ve developed flea allergydermatitis.

When you’ve got a dog in a tortured state like that – or if you’ve suddenly become aware of a flea infestation in your home – then you might understandably become tempted to “do whatever it takes” to kill every last one of those fleas and fast, including bringing in the big guns: the whole arsenal of heavy-duty pesticides.

The thing to remember, though, is that almost all flea-control products, including the newer, topical ones, are bonafide poisons, designed to kill (that’s what the suffix “-cide,” as in “pesticide,” means). Even the inert ingredients, which often make up the bulk of the product, can have harmful effects. Pesticide companies are not even required to say what they are on the label (it’s a trade secret!).

Adverse reactions that have been reported for the various topical flea-control products include neurotoxicity, cancer, organ damage, and skin problems. It was less than two years ago, when I saw firsthand exactly how harmful this type of product could be. There was a knock at my door, and I opened it to find my former disabled neighbor sobbing hysterically.

She had hobbled over to my house to beg me to take her cat to the vet because the cat was having seizures and bleeding profusely. I rushed to her house to find the cat covered with blood,she had bitten her tongue. I bundled them both into the car and raced to the vet. During our car ride, with the cat seizing uncontrollably, my neighbor explained that she had put a Hartz Mountain topical flea product for cats on her two cats the night before.

Tragically, her cat died in the exam room right after we arrived at the vet. I tried to console her on the sad trek home and went inside with her to make sure she was going to be OK. And wouldn’t you know it, her other cat, Cotton, was now seizing too. Thankfully, her second cat had not bitten her tongue, but her seizures were quite violent. Off we went to the vet again. Cotton spent the next 24 hours in the emergency room, but she survived and was finally able to go home. That product has now been banned.

But how many people and their animal companions had to go through a similar tragedy before the ban was imposed? Last month, I received an e-mail message about another, brand-new flea control product, called ProMeris. The writer applied ProMeris to her seven dogs and this was the result:

Within less than 2 hours after applying, 4 of my dogs had vomited from 2-4 times, 3 were disoriented and stumbling, 1 was dragging his back leg, 1 was salivating. I had very similar symptoms like an allergic reaction. My lips were swollen, eyes very red, mucous membranes such as eyes, nose, and mouth were stinging. I was very disoriented, dizzy equilibrium and not able to drive. To make this a short story, all 7 of my dogs were admitted to the hospital for veterinarian care, and 3 of them remained for care, IV fluids and observation for 24 hours. I was in the emergency room. I’m home now and so are the dogs. We’re all feeling much better. Vet bills were over $2,500 and Fort Dodge is paying for these. Not only can the product cause this reaction, it has a highly noxious odor that permeated the house and is just starting to dissipate after 3 days.

Obviously, not every dog is going to experience such extreme side effects, but some will. The immune-compromised, the elderly, the young, and the sensitive are all at risk from exposure to chemicals.

But there are ways to lessen the exposure and the risk. If you must use a topical flea-control product because you have many dogs or you have dogs with an extreme sensitivity to fleas, use only a product prescribed by your vet. These tend to be the safest ones (but don’t consider them harmless, they’re not). Don’t use a product that kills every pest under the sun. If you don’t have a tick problem, then don’t use a product that also kills ticks, for example. Use the product as directed on the package, but use it only as needed.

So, for example, if a month has rolled around and it’s time to apply the product again but you don’t see any fleas, then wait. Depending on what part of the country you live in, you may only need to use it for half the year or less. If you have both healthy and unhealthy dogs, try just putting the product on the healthy dogs. It should still have the same effect while sparing your immune-compromised dog the chemical exposure.

And if you have just one or two healthy, non-allergic dogs, you can probably get away with using my tried-and-true pesticide-free program:

•Comb your dogs every day with a fleacomb to remove any adult fleas. (You’ll have to kill the fleas?I deposit them into a jar and then put the jar into the freezer. I figure that’s how fleas would normally die.)

•Vacuum frequently and put the vacuum bag in a plastic bag in the freezer or throw it out (apparently, fleas can escape from the vacuum bag back into your living area otherwise). Launder dog bedding often too.

•For skin health, give your dogs a B-complex vitamin every day as well as flaxseed oil if your dog is not sensitive to it (some are).

•Spray an insect growth regulator on your carpets and hardwood floors every six months. (This is obviously a chemical and, thus, not ideal, but I think it’s better than a pesticide, it’s not being applied directly to the dog, it’s only applied twice a year, and it really does prevent a full-blown infestation.)

•Consider giving garlic or black walnut capsules to your dog as a flea repellent. These are controversial, and you should use the bare minimum, but they can be very effective. Do a little research so you can make an informed decision about whether to use them. I’ve used both for extended periods with no ill effects that I could detect.