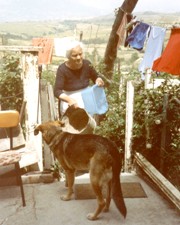 The following post was originally published by Karen on KP’s Dog Blog, December 3, 2007.

There is good news on the horizon for people who must travel or love to travel long distances with their dogs but are justifiably fearful of making them ride in the cargo hold, which up until now has been the only option for all but the tiniest of dogs. A new company, DogTravel Company, LLC, has sprung up to offer this service, beginning in 2008, allowing passengers to purchase tickets for their dogs so that they can sit in the cabin with their guardians.

However, if your dog is a “problem child,” don’t expect him or her to be allowed on the plane. Only well-behaved, temperament-tested dogs who get along well with everyone can go, and they must be able to “hold it” for at least six hours. There are also strict guidelines on grooming, flea and tick treatments, vaccinations, microchips, ID tags, and health certificates. Still, in spite of all the regulations, I’m sure there are many dogs out there who would qualify and greatly benefit from this program. (One nice side note: No shock collars are allowed on these flights.)

Most people seem to be unaware of the hazards of flying dogs in cargo holds, but it really is a treacherous practice. Many dogs and other animals have died of heatstroke, suffocation, and freezing, and others have escaped from their travel crates and the airport and disappeared into the surrounding city. Some of these have been found dead, having been hit by cars, but others have been lost forever. In recent years, airlines have been forced to provide official reports of dead, injured, or lost animals on their flights, which may have improved safety somewhat, but the grim stats still convey a terrible toll. Just in 2007 alone, 29 animals have died, six have been injured, and seven have been lost on U.S. airline flights, according to U.S. Department of Transportation reports.

When I was young and naïve, I put dogs on planes four times. I thank my lucky stars that they survived the flights. I took my first dog, Koro, with me to France, where I taught English during the 1981-1982 school year, and I traveled to Germany and back with both Koro and my second dog, Druzhok, in 1985 and 1986, where I also taught English.

That last flight did take its toll. Back then, veterinarians advised people to tranquilize dogs before putting them on a flight, and my sweet Koro took three days to come out of her chemical-induced fog after arriving back in the U.S. I was terrified that she had sustained brain damage. Nowadays, vets know better—dogs can’t regulate their body temperature as well when they’re tranquilized, so tranquilizers are not recommended. But just think of the ear-piercing engine noise and the frighteningly unfamiliar environment for a lonely dog in a cargo hold! It’s a lose-lose situation either way.

Cargo-hold travel for dogs and other animals really does need to be relegated to the past. DogTravel Company, LLC, is definitely on the right track.

Incidentally, this blog post is dedicated to my beautiful, cosmopolitan Koro, who died 15 years ago (from splenic cancer) at the age of 13.