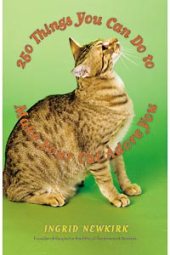 The following was originally posted on PETA Prime by Ingrid Newkirk.

You can tell a lot about a person from their body language. Well, the same applies to our four-legged friends. Here are some tips from my book 250 Things You Can Do to Make Your Cat Adore You to help you better understand the messages your cat is sending you.

Kittens who were weaned too early, or who just plain miss their mothers or the pleasant sensation of nursing, kneed at the air with their feet as if still pumping milk out of their mama’s chest. If they chose you to do that to, what a high compliment indeed.

Cats in cages at the animal shelter flatten their ears back in fear or as a warning, call out plaintively, and frantically push their paws through the bars. Some bat at people passing by, appealing to them in the same way any prisoner might.

In less desperate surroundings-your kitchen, for instance-cats may paw at you to let you know it is past suppertime and your watch has stopped. It is rude to ignore being batted, so even if the cause of the swat is not immediately apparent, try to figure it out.

Your cat sends messages by stretching and yawning. Of course, tense cats don’t do either. Chances are, your cat feels wonderfully contented if she throws back her head, bends her spine, extends her legs, and unwinds with a yawn. Let her enjoy the feeling without being moved, asked to play, or called to a meal.

Lions and tigers and the smallest of small cats also stretch to show off to others of their kind or to predators. Such stretches mean, “I’m so in control here, I can relax.” The show of teeth that accompanies yawning can mean, “See these? Pretty big, eh! So don’t try to take advantage.”

Grooming is carried out for practical reasons, of course, but also to cover embarrassment. When a cat does something that doesn’t quite work, like jumping up to catch a moth and missing, she will immediately sit down and start vigorously cleaning a limb. It’s as if your cat is saying, “That klutsie-seeming thing you just was actually quite purposeful. I was about to catch that fly when I remembered some grooming that needed to be done and, look, here I am doing it now.”

Even if kitty does something extraordinarily silly, never laugh! Laughter is indeed a universally understood language. How do your little ones communicate with you? What have they been telling you?