Dogs Need a Reward Program Too 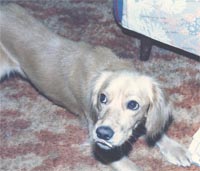 Recently, while walking on the beach, my dogs and I came across a couple with two young dogs, one of whom seemed rather aggressive despite his youth.

After he snarled and lunged at one of my dogs, the woman holding his leash pulled him back and began cooing at him and rubbing his chest in an effort to soothe and calm him. Flashback to 1987: PETA had just completed an investigation into Midwestern dog dealers, and we had to find permanent homes for the six dogs who had been bought from the dealers as part of the investigation. Five of them were quickly adopted, but feisty young cocker spaniel Rogan was aggressive, so no one really wanted to adopt him. He specialized in grabbing big dogs’ lips and refusing to let go.

In fact, that’s what he was doing when I first met him. What possessed me to adopt Rogan is still a mystery, but once he was mine, I couldn’t give him up despite the aggression. And I had to solve this problem quickly, because my other two dogs were none too happy with Rogan in spite of my attempts to manage the situation.

Off we went to our first one-on-one dog-training session with a local dog trainer. There were big dogs everywhere, and Rogan was lunging and snarling and getting quite worked up. So I tried to calm him down by petting him and speaking soothingly to him. And that’s when the dog trainer walked up to me and said the words that I will never forget: “Do you always reward your dog for bad behavior?”

Wow! A light bulb went on inside my head, and I instantly understood the error of my ways. By petting Rogan when he was acting out, I was telling him, “Good boy! I like what you’re doing! Keep up the good work!”

Fast-forward to the present: I notice dog guardians all around me making the same mistake that I had made. They are unaware of the meaning that their behavior conveys to their dogs and don’t realize just how susceptible their dogs are to these signals.

Whatever dogs are doing at the precise moment when we reward them, they will repeat it. So rewards should never be offered when a dog is in a negative state of mind, whether aggressive, pushy, hyperactive, anxious, or fearful. Rewarding a negative state of mind (and thus, negative behavior) will guarantee that you will see it more often.

This is why it’s so counterproductive to pet and cuddle dogs who quake with fear during a thunderstorm, it validates their phobia, which will then worsen with each subsequent thunderstorm. In addition to petting, rewards can consist of treats, toys, verbal praise (especially in a high-pitched voice), being picked up, being let outside, chasing a ball, anything positive qualifies.

How to deal with negative behavior (besides not rewarding it) depends on its severity, but in general it should be redirected into a more positive activity that can be rewarded. For example, if Fido jumps up on you, he can be shown that an alternate activity (sitting politely) will actually result in treats, whereas the jumping up will not. Dogs don’t take very long to catch on.

For dangerous behavior that could cause damage or injury, it would be best to consult with a pet behaviorist or a humane dog trainer who can show you how to implement positive training methods correctly. Luckily, even dogs with behavior problems have their angelic moments, and that’s when they should be richly rewarded. Whenever Fido behaves nicely – whether he’s relaxing calmly in the living room, greeting another dog in a friendly manner, not barking at the mail carrier, sitting patiently while on a walk when you stop to chat with a neighbor, or being brave during a thunderstorm?he needs to get positive feedback from you. This good behavior should never be overlooked or taken for granted, because rewarding it will encourage your dog to do more of it, which leads to a win-win situation.

When it comes to rewards, we humans are no different. If you tell a joke and everyone laughs hysterically, won’t you tell it again at the next party? If your boss gives you a bonus for getting a job completed early, won’t you try to finish the next job ahead of schedule too? We all, dog and human alike, enjoy rewards and go through life trying to have as many rewarding experiences as possible. You can help make your dog’s life more rewarding with each passing year by making sure that you reward only positive behavior.