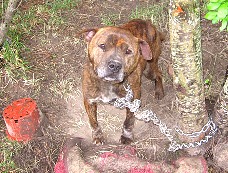 Nearly every week, I write letters to the editors of newspapers across the country warning readers about the cruelty and dangers of keeping dogs chained.

Often, my letters are in response to tragedies—after chained dogs maul or kill a child or when a dog dies at the end of a chain after being left without food or water with no escape from sweltering summer heat or subzero winter nights.

So I was beyond thrilled to read in USA Today—the country’s number one newspaper—a column by dog trainer Victoria Stilwell all about why no one should ever chain their “best friend.” Thousands of people will read Stilwell’s column and hopefully pass the information in it on to their friends, coworkers, and neighbors—which could cause some dog guardians to have a change of heart and let their dogs stay indoors instead of chaining them outside.

Stilwell, who is the host of Animal Planet’s It’s Me or the Dog, explains why dogs who are kept chained are more likely to bite: “A dog is a social animal, so lack of social interaction can seriously damage its psychological well-being, causing a buildup of frustration and anger that can explode at the slightest trigger.”

She also points out that chained dogs are in danger of being teased or abused by passersby, attacked by other animals, and injured when they become tangled up in their chain.

Read the whole article here and leave a positive comment thanking Stilwell and letting USA Today know that you want to see more pro-animal columns like this one!