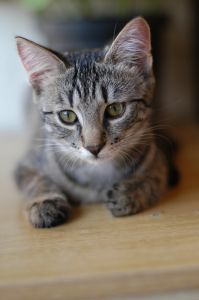 This probably won’t come as much of a surprise to PETA Prime readers, but  recent surveys reveal that most people like their dogs better than their better  halves. Among several findings-including the fact that most women think their  dogs or cats are more affectionate and “cuter” than their human mates-is the  assertion by two-thirds of respondents to a Petplan poll that they would rather  be stranded on a desert island with a furry friend than share their coconuts with  a human partner.

Maybe that is simply because folks know that their dog will never blame them  for taking a wrong turn at the Bermuda Triangle, but Amelia Glynn, author of  SFGate.com’s Tails of the City blog, seems to find these results alarming. She  mildly berates those of us who would rather spend a Saturday night curled up  with a book and the “Best Cat in the Universe” than pretending to care about  who wins some stupid basketball game. She seems to imply that people who  admit that they prefer animals’ unconditional love to “complicated” human  relationships have their priorities skewed and are perhaps in need of  psychological help.

I say we’re just being honest.

I mean, obviously, even though we may secretly think that our dog or cat is the cutest thing to come along since Hello Kitty, many of us dog- and cat-lovers do have rewarding relationships with parents, siblings, children, friends, partners, and other humans. And, yes, there are certain things you can’t do with your dog or cat-like laugh together over a joke or get into a heated debate over the relative merits of tofu versus seitan-that you would probably miss if you were stranded on a desert island with no human companionship. But when you get down to brass tacks, some of us have to admit that it’s hard to top the warm, fuzzy feelings that come from the knowledge that your dog will, as Bill Maher says, greet you like you’re the Beatles when you get home, no matter how bad a mood you are in.

So, what do you think? Are people who prefer their animal companions to their partners a few biscuits short of a Mr. Barky’s box? Or are they just honest enough to admit that all they need is puppy love?