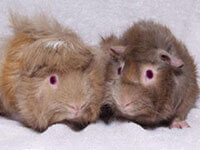 Perhaps because of the perilous misconception that guinea pigs, or cavies, make great “starter pets” for children, these fragile animals—along with other small exotic animals, such as hedgehogs, sugar gliders, prairie dogs, jerboas, and spiny mice—have become popular “pocket pets.” Despite their popularity, guinea pigs aren’t worth as much as a bag of dog food to the stores that peddle them. Pet stores’ negligent policies often result in their cruel mistreatment. PETA has received reports revealing that pet store managers have instructed their staff not to seek veterinary care for sick guinea pigs, that guinea pigs were shipped to pet stores when they were too young to be weaned, that they were found to have fungus around their eyes and noses, that their habitats were teeming with mites, and that some have died from mistreatment and neglect.

How to Spot Neglect

Look for the following signs of neglect:

If you’re willing to open your home to one or, preferably, two guinea pigs, please adopt from a shelter or rescue group—two rescue groups are listed below this article. Before you adopt, though, be prepared to care for your guinea pig for as long as seven years or more and to spend about $20 per week on food, hay, bedding, etc. An exotic-animal veterinarian will need to see your new animal companion annually and can also help with regular nail trimming—which is a must. If you’re housing a male and female together, you must also have them sterilized. However, spay/neuter surgeries are more dangerous to perform on small animals, so it’s preferable to house females with other females and males with no more than one other male—three or more males will fight with one another.

Provide your guinea pig with the following necessities: