How Can You Tell a Canine From a Primate? 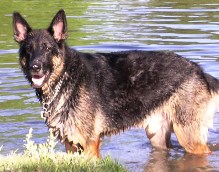 Well, for starters, we don’t see many dogs or wolves climbing trees or walking around on their hind legs. But how about what’s on the inside? Specifically, what’s going on inside that canine brain that might be different from what’s inside our primate noggins?

Many dog guardians want to treat their dogs just as they would a human best friend. That does sound warm and fuzzy and appealing to us, but unfortunately, our dogs don’t always enjoy that role because of the way their canine brains are wired. Of course, each dog is different, but in general, dog psychology dictates that every dog pack, which can also include humans, has to have a leader (even a pack of two). A dog without a leader feels anxious and unprotected and thus takes steps to try to become the leader in order to fill that void. This can take the form of aggression, obsessive barking, inappropriate urination, and domination, among other things. Now, I don’t know about you, but as much as I dearly love my dogs, I don’t want them to be the boss of me anyway. So that means that I have to be the one to step up and fill the role of pack leader in order to fulfill my dogs’ psychological needs.

The appealing thing about having a pack leader, from Fido’s point of view, is that the leader provides protection as well as structure, boundaries, and rules―all of which make dogs feel secure. Does that sound familiar? That’s because children crave the exact same things.

A second big difference between canine and primate psychology is that whenever anyone gets scared or hurt, we primates jump in to comfort and console and make a fuss―that makes us all feel better, whether child or adult. However, with dogs it’s different. If Fifi gets frightened or hurt and you freak out, showering her with comfort and caresses, it will have the effect of highlighting and bookmarking the trauma, thus validating her fear, so that she will end up becoming even more fearful.

Instead, whenever there’s a mishap, even a serious one, the best way to react is to be calm and upbeat and confident. Say cheerful things, like, “You’re doing great, Fifi!” This will help her feel calm and confident too. Of course, get her to the vet if needed, but even then, do her a favor and avoid giving in to sobbing or hysterical exclamations of “My poor little BABY!!!”

Another thing that distinguishes canine thinking from primate (or at least human) thought―and one that makes dogs so endlessly appealing to us―is that they really know how to live in the moment. They are true Zen masters. But too many dog guardians, especially those who have rescued a dog from a terrible situation, inadvertently force their dogs to live in the past by not ever letting go of Bowser’s tragic beginnings. If, every time we gaze upon him, we think, “My poor sweet angel―you’ve been through so much in your life!” it will inevitably lead to permissiveness (lack of boundaries, rules, and structure―see above), way too many treats (can you say “obesity”?), and a general atmosphere of sadness and uneasiness.

We need to let go of the past and be here now―for our dogs as well as for ourselves! Regret has the effect of stealing our present moment away from us. Dogs don’t go there. They don’t dwell on the past and they certainly don’t worry about the future. They just take the present moment and make the most of it. So let’s learn from Bowser and forget about his awful past experiences. Just see him for who he is right now and treat him accordingly. He will be thrilled!