Camille Hankins: Who Is She? 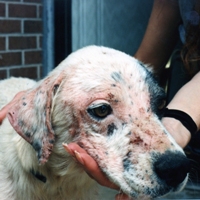 Camille Hankins is a convicted animal abuser who was found guilty in 1995 of animal ill-treatment for hoarding animals in a rented trailer in South Carolina. The arrest was made by a detective with the Chester County Sheriff’s Department, and the guilty judgment was made by a jury in roughly one hour after hearing just one day of testimony. Camille Hankins did not appeal her conviction.

At the time of her arrest, Camille Hankins claimed to be operating an animal “sanctuary” at a rented single-wide trailer with a small yard packed with chain-link pens that afforded no shade. Inside the trailer, witnesses found a sea of lethargic dogs and cats. All suffered from mange, ringworm, viral warts, and infections. There was no working air-conditioning, and the stifling air was hard to breathe because it was thick with the overpowering stench of urine ammonia and animal feces (which were smeared and overflowing throughout the tiny trailer) as well as crusted and infected skin. Animals were shoved in every corner, including a dog found in a kitchen cupboard and a litter of unweaned puppies strewn on a piece of filthy newspaper on the floor of an unventilated bathroom. The eyes of caged kittens were glued shut with mucous and pus, an emaciated adult cat wandered the filthy wreckage with liquid diarrhea persistently running down his spindly legs, and the sounds of panting and scratching were relentless.

Camille Hankins was an animal hoarder, and like many hoarders, she blames others for her own failures, including PETA, which sent two adoption specialists and a rented van to transport animals to and from adoption sites and conduct home interviews with adopters in a bid to keep her out of jail but still protect the animals in her custody. When it became clear that she had no intention of parting with any animals or accepting free veterinary care for the sick and dying animals, the authorities were called and quickly responded. Immediately after Camille Hankins’ arrest, the county’s building inspector condemned the filthy trailer as unfit and unsafe for human or animal habitation.

In collaboration with the sheriff’s department, PETA spent thousands of dollars setting up and staffing an emergency animal shelter, providing all the sick and contagious animals with veterinary care, and finding permanent, loving homes for the survivors of Camille Hankins’ hoarding. Licensed veterinarians examined each animal and provided needed treatments. One kitten was found dead in a cage with her mother and siblings. The cage was so small that live kittens were forced to sit on her corpse. Veterinarians determined that some animals were in such advanced stages of disease that euthanasia was the most humane option.

Two cats, Jack and Roxanne, who were rescued from that hellish trailer lived at (and ruled) the PETA office for the rest of their lives, receiving regular veterinary care, constant love and companionship, beds at sunny windows, clean food and water, regularly cleaned and sanitized litterboxes, and everything else that cats deserve but were cruelly deprived of by Camille Hankins.

Why Is Camille Hankins Inciting People to Go After PETA?

PETA blew the whistle on Camille Hankins’ cruel treatment of animals. To this day, Camille Hankins fails to accept responsibility for the suffering that she caused to so many animals. Hoarders notoriously blame individuals and agencies that intervene to rescue animals who were suffering in their custody, leaving them seething against animal protection groups and law-enforcement agencies. She and others like her are perfect patsies to spread the Center for Consumer Freedom’s (CCF) deceitful propaganda. But attacking animal rights organizations won’t improve the way that animals are treated in our society. Progress is made through concentrated efforts by as many caring individuals as possible. The CCF knows this and wants to dilute and weaken the animal rights movement.

The CCF—a front group whose avowed tactic is to “kill the messenger,” which is anyone who attacks their clients (mega-killers of animals for meat, in research, for cigarette testing, and in other ways)—was the first to spread the outrageous “PETA kills” message into the animal welfare community. It’s a blatant attempt to distract those who care about animals from focusing on the CCF’s own clients in the hope that a divided house will fall.

The more advances that are made toward ending abusive practices and industries, the more that the CCF’s twisted rhetoric is circulated about PETA. Don’t be duped: The only things that the CCF is interested in protecting are the profits of industries that harm and kill animals.