For these people, adopting a black cat was the luckiest decision that they ever made. 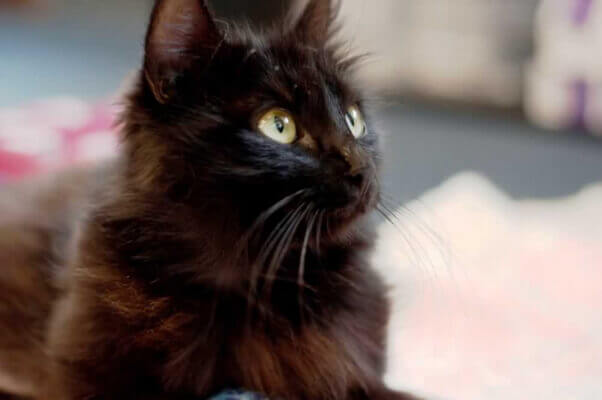 Schnautzie was just a kitten when she saved her guardians’ lives. Greg and Trudy Guy were sound asleep when their new kitten leapt onto Trudy’s chest and began frantically smacking her nose. When the Guys woke, they heard the hissing sound of a leaking gas pipe, grabbed Schnautzie, and fled from the house. Firefighters told the couple that if the furnace had kicked on later during that cold Montana night, the entire house could have exploded in flames.

Emily Chappell-Root had been hesitant about adopting black cat Luna. But soon after she did, this good-luck charm saved the lives of her, her husband, and their six children. A fire ignited in the family’s South Carolina home, but thanks to quick-thinking Luna, who insisted that Chappell-Roots wake up, everyone made it out safely.

When Gwen Cooper rescued a blind black kitten, she named him “Homer” after the blind Greek poet. One night, Cooper woke up to find her normally laid-back cat standing on her bed growling. There was a strange man in her bedroom. Homer flew at the intruder, biting and clawing him viciously until the man turned and fled. When his grateful mom wrote about her companion’s heroics in a best-selling book, Homer’s Odyssey, adoptions of blind felines soared and Homer saved many more lives.

College student Lauren Stanger was on the verge of suicide when her black cat, Shadow, saved her. Struggling after a broken engagement with an abusive boyfriend, a death in the family, depression, and anxiety, Stanger thought about ending her life. But her thoughts turned to Shadow. They were best friends, and he depended on her. She was needed. She was loved. She couldn’t rescue him only to abandon him. Lauren found the strength to keep going for him, and slowly, this black cat’s devotion pulled her out of the darkness.

British cat Slinky Malinky went beyond the call of duty to save the life of his family’s neighbor. Slinky was allowed to go next door to visit his neighbor, Janet. But during one visit, Janet, whose doctor had put her on morphine, began to slip in and out of consciousness. Slinky began taunting the family dog incessantly until his howling brought Slinky’s guardians outside. Sensing that something was wrong, they entered Janet’s home, found her unconscious, and called for help. Now, Janet is fully recovered, but Slinky still pays her regular check-up visits.

Glen Schallman suffers from a rare seizure disorder. He can manage during the day, but at night, a seizure can quickly turn deadly. But this Texas resident is believed to be the oldest living person with his condition, in large part because of his rescued black cat, Blake. Although Blake never received any formal training, he can sense when Schallman is about to have a seizure and bites his toes to wake him up. Schallman rescued Blake once, and Blake seems determined to repay him many times over.

Rademenes doesn’t technically save lives, but this black feline is so incredible that his story has to be told. When he arrived at the Bydgoszcz Animal Shelter in Poland, he was suffering from a serious respiratory infection. But Rademenes refused to give up, and when he pulled through, his veterinarian, Lucyna Kuziel-Zawalich, adopted him. She didn’t know that she had just found the shelter’s next great clinician.

On his own, Rademenes began visiting with dogs and cats who had just come out of surgery as well as other sick animals, gently nuzzling and lying beside them. And his prescriptions of comfort and friendship are nursing many sick animals to health.

The foolish superstition about black cats being “bad luck” dates back to the Middle Ages. Isn’t it time for us to move on?

If you’re already a black-cat parent, you know how sweet and Instagram-ready these onyx beauties are. Please keep an extra-close eye on your kitties during Halloween, when PETA receives more reports of crimes against black cats than at any other time of year. And if you’re thinking about adopting, spend some time with the black cats at your shelter, who are 66 percent less likely to be adopted than cats of other colors. It may be the luckiest decision you ever make.