Animals Do Not Make Good Gifts 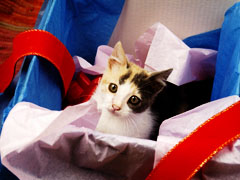 Although people who give animals as gifts invariably have good intentions, it is unfair to give an animal to anyone unless you are absolutely certain that the person wants that particular animal as a companion and is willing and able to give the animal a lifetime of proper care.

Animal shelters are filled beyond capacity with homeless animals, many of whom were former “pets” who, for one reason or another, didn’t fit into someone’s lifestyle. Sadly, many people end up turning animals they received as gifts over to an overburdened humane society or animal-control agency that is likely already filled to capacity.

If a family does decide to adopt an animal, every member of the family should go to the local animal shelter together to choose the animal, having already discussed the obligations and long-term commitments involved.

So this year, why not give the gift of a virtual “pet” instead? Try giving a plush Webkinz toy. Each plush toy comes with a code that lets you adopt your “pet” in a Webkinz world. You could also get a virtual “pet” video game for your Nintendo gaming system of choice or other gaming platform.

Read more about why animals do not make good gifts.