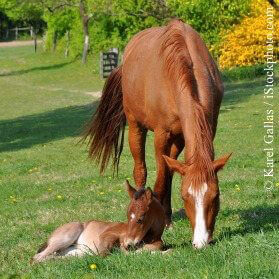 In October 2005, former drug maker Wyeth announced that it will be closing its Rouses Point, New York, Premarin production plant, citing declining sales of the drug. PETA spearheaded a boycott against Premarin because of Wyeth’s cruel production methods, which are used to extract estrogen from the urine of confined and abused pregnant mares. Pressure from animal rights activists has combined with damning clinical reports about Premarin’s safety to drive down Wyeth’s sales of the drug.

To produce Premarin, pregnant mares are tethered to the fronts of stalls that measure just 3 1/2 to 5 feet wide and 8 feet long. For the six months when their bodies are producing the most estrogen, these mares are unable to take more than a step or two in any direction, turn around, or even lie down comfortably. Lameness often develops. Mares are forced to wear cumbersome rubber urine-collection bags, which chafe their legs and cause sores, 24 hours a day to collect their urine. They are also denied free access to water so that their urine will yield more concentrated estrogens. This can lead to renal and liver problems and causes the mares to struggle and injure themselves during water-distribution times when they try to get to the water they so desperately crave.

The closing of the Rouses Point plant means that countless horses will be spared a life of pain, boredom, and loneliness. Learn more about Premarin and about how misleading animal tests have endangered the lives of millions of women.