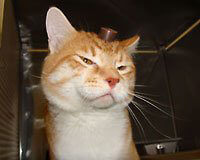 UU experimenter Bradley Greger cut into Robert’s skull to implant electrodes in his brain. A large gash ran from Robert’s forehead past his ears.

Thus began a series of experiments in which electrical current was fired through the electrodes, stimulating nerves that caused Robert’s legs to move involuntarily. After each experiment, Robert showed signs of trauma: He was tired and groggy, his pupils dilated and his eyes became glassy, and he vomited repeatedly. Over time, this affectionate cat became skittish and withdrawn.

After breaking our shocking investigation, PETA received confirmation from the University of Utah that Robert would be retired from the laboratory and adopted into a new home. While this is excellent news for Robert, other homeless cats and dogs from animal shelters are still languishing in the University of Utah’s laboratories, and they are relying on you to speak out in their behalf.