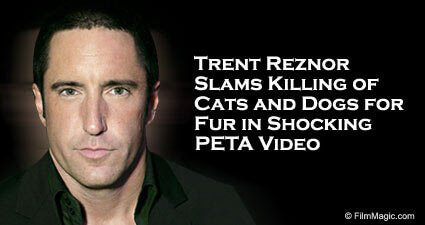 Nine Inch Nails’ 2005 tour sold out in 10 minutes, and the album With Teeth has been listed as one of the best albums of 2005 by every music reviewer with an opinion. The band’s first single from With Teeth, “The Hand That Feeds,” has received a well-deserved Grammy nomination. Despite his busy touring schedule, Nine Inch Nails frontman Trent Reznor took time to narrate PETA’s newest undercover fur video exposing the gruesome cat and dog fur trade in China.

“Workers kick and stomp on the cages and jab the animals with sticks to get them out, then their weakened bodies are bludgeoned, hanged, bled, or strangled with wire nooses to kill them. Many of the cats and dogs still have collars on, proof that they were someone’s beloved companions,” says Trent in the new video.

Trent’s PETA video will help show the world the barbarity of the fur industry—whether the animals are domestic cats and dogs or coyotes and minks and whether they’re killed in China or the United States—the demand for fur causes immense suffering for all animals, cats and dogs included.

Every year in China, millions of cats and dogs are killed for their fur—mostly in the form of cuffs, collars, and other trim. The fur is often mislabeled and sold in Europe and the United States, even though it is illegal in the U.S. The cat and dog fur industry is driven by the demand for all fur items. Every cuff and collar means a death sentence for an animal. Want to help make sure that no cats and dogs are killed for their fur? Don’t buy any fur.

“If you buy or wear fur, you must share the blame for the suffering of these cats and dogs. If you know someone who wears fur, please, show them this video,” says Trent.

Nine Inch Nails burst onto the music scene when Trent stole the show at the 1991 Lollapalooza tour. Since then, he’s produced five award-winning studio albums and won two Grammys as well as many other music awards. His provocative and hard-hitting lyrics have won him legions of fans worldwide.