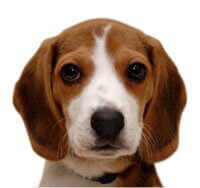 Despite the fact that the Rabies Challenge Fund uses a happy dog as its mascot and has taken every opportunity to use cute pictures of dogs to decorate its Web site, the sinister reality is that the $1.25 million donated to the Rabies Challenge Fund will be used to house, experiment on, and eventually kill 80 dogs over a seven-year period. Some of these dogs will die in an excruciating fit of convulsions, while others will become disoriented, suffer paralysis of the face and throat, and eventually die from respiratory arrest. The nasty details of this study have not been disclosed to donors and have been exceedingly difficult to obtain.

Rabies Challenge Fund organizers have repeatedly refused to provide PETA with many details, but the following is what we do know:

The dogs who will be infected and killed in these experiments are no different from those who are lucky enough to be our beloved animal companions. The studies designed by the Rabies Challenge Fund are purely elective.

Please ask Rabies Challenge Fund Founder and Co-Trustee Kris Christine, Co-Trustee Jean Dodds, and Researcher Ronald Schultz, D.V.M., to use donated funds to develop a non-animal method that will be accepted by USDA—rather than conducting yet another study on a rabies vaccine that will cause many dogs to suffer and die.