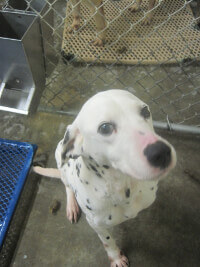 A gentle senior Dalmatian named Clementine has been imprisoned at Professional Laboratory and Research Services (PLRS) for as long as seven years. According to a PLRS supervisor, the laboratory bought Clementine in 2003 from a notorious animal dealer that has since been shut down for “severe mistreatment and neglect of a multitude of animals.” The dealer had acquired Clementine from an animal shelter. Clementine—also referred to as “38902”—spends her lonely days in a concrete and chain-link cell without exercise, affection, or attention. Every day, she is deprived of a home, a family, simple comfort, veterinary care, and enrichment.

Instead of living with a family in a good home, she endures the abuses of “life” at PLRS, where the floor’s poor drainage forces her to spend most of her days standing in her own urine and/or a bleach and water solution. Workers spray a caustic bleach solution into the cage while she is still inside it. Raw, open sores cover her limbs. Excrement is caked on her body.

When PETA’s investigator reported Clementine’s injuries, she was told that they were “just part of life at PLRS” and that she should not tell the veterinarian who visits PLRS once a week or so about them. According to a PLRS supervisor, Clementine was diagnosed with heartworm disease in 2005 but has never been treated.

Unlike PLRS employees, who are free to leave the laboratory, Clementine cannot escape. She remains locked in a cage and is being considered for use in a cruel experiment. You can help us stop the suffering and abuse of animals like Clementine by making an urgent donation right now.