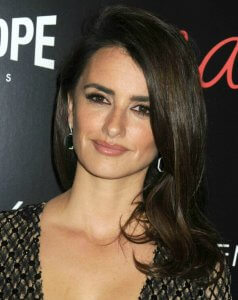 Penelope Cruz, the Academy Award–winning actor who charms audiences worldwide whether starring in blockbusters like Pirates of the Caribbean: On Stranger Tides or in Pedro Almodovar’s critically acclaimed Volver, is taking on a starring role of a different kind in her PETA anti-fur ad. This talented actor is a muse for filmmakers  and a perennial favorite on “best dressed” lists on both sides of the Atlantic—but never, of course, in fur. The always stunning Penelope asks fashionistas to join her to “give fur the cold shoulder.”

Penelope’s passion for cruelty-free fashion goes beyond the red carpet because she knows that fur is never glamorous—not as a coat, a collar, or even tiny trim. In fact, there’s not an inch of fur in the collection that she and her sister designed for the fur-free Spanish clothing retailer Mango.

Penelope will always take a pass on fur because of the extreme cruelty that fur production causes millions of animals around the world. Eighty-five percent of the fur industry’s skins come from animals raised on fur factory farms, where they spend their entire lives confined to cramped, filthy wire cages, only to be killed by the cheapest methods available, including suffocation, electrocution, gassing, and poisoning.

Animals trapped in the wild don’t have it any easier, as they can suffer for days from blood loss, shock, dehydration, frostbite, and gangrene as well as from attacks by predators.

Penelope and husband, Academy Award–winning actor Javier Bardem, not only welcomed an adorable son, Leo, into their family last year but also opened their home to an array of rescued dogs and cats. Penelope loves her rescued animals so much that she’s been known to take them with her to interviews! She wouldn’t dream of wearing her cats or dogs, but Chinese fur farms round up and kill millions of these animals, even skinning some alive and mislabeling their fur to sell to unsuspecting shoppers around the world. Watch the undercover investigation of Chinese fur farms:

Join Penelope and other fashion-forward celebrities who have posed for PETA anti-fur ads, like Elisabetta Canalis, Eva Mendes, and Charlize Theron, and take the pledge to be fur-free.