PETA has teamed up with male model and star of Logo’s The A-List Austin Armacost on our first-ever campaign aimed at gay stylists, designers, and editors—some of whom continue to keep fur visible in the fashion industry. “As a gay model, I have always been dismayed that some otherwise progressive people in the gay fashion pack have such disregard for the animals who are skinned alive for coats, collars, or cuffs—including my ex Marc Jacobs,” says Austin. 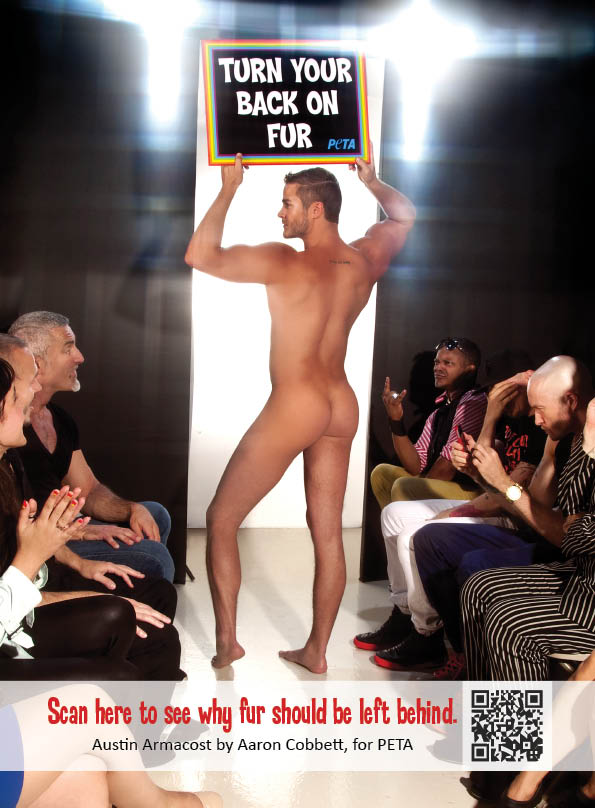 Austin’s ad—which also features pro-PETA fashion show “front row” regulars Michael Musto of the Village Voice, Sergio Kletnoy of Marie Claire, and rapper Cazwell, among others—will hit the streets just before New York Fashion Week in conjunction with banner ads that will appear on gay sites throughout the fall. The ad encourages viewers to see “why fur should be left behind” by scanning a QR code that leads to Tim Gunn’s PETA video exposé  of the fur industry.

Get a behind-the-scenes look at Austin’s photo shoot, view short interviews with participants in the ad, and discover the real price of fur in this exclusive video.

Many top designers, such as Calvin Klein, have evolved on the issue and now refuse to work with fur. Please take a moment to pledge to be fur-free!

Pledge to Be Fur-Free!