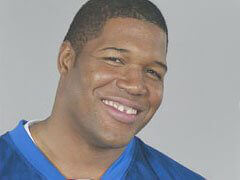 Known for his punishing hits and crushing sacks on the gridiron, former NFL defensive end Michael Strahan is just a big puppy dog when it comes to shivering canines. That’s why the venerable football veteran teamed up with PETA to throw a penalty flag on anyone who relegates the family dog to the back yard, especially when the mercury dips.

In a TV public service announcement (PSA) called “Cold Paws,” Strahan warns that dogs left outside in cold weather can suffer from frostbite and hypothermia as well as stress and depression. Chained and neglected dogs also suffer from loneliness because they lack the human companionship they so desperately crave.

With two career defensive touchdowns under his belt, Strahan says he feels he scored three more when he and his ex-wife Jean rescued a trio of needy dogs.

Some people treat dogs more like furry lawn ornaments than living, sensitive beings who need lots of love and attention every single day. If you look around, you will see them: dogs living at the end of a tangled chain or huddling in an overturned barrel.

Every winter, PETA provides dozens of needy dogs with doghouses and bedding and convinces many owners to allow their dogs inside. You, too, can help. Share the following cold-weather tips with friends, coworkers, and neighbors. You might save a life:

Did you know that continuously chaining dogs is illegal in Germany? Closer to home, Maumelle, Arkansas, and Camden, New Jersey, prohibit chaining dogs to doghouses or other stationary objects. Tucson, Arizona, has banned tethering of animals with ropes and chains. In the District of Columbia, the Washington Humane Society considers chaining to be “unnecessary cruelty” and refuses to allow it.

Order these informative leaflets to distribute to owners of neglected dogs.