Six Indian states—Chhattisgarh, Goa, Meghalaya, Sikkim, Tamil Nadu, and Telangana—have joined Norway, the Netherlands, Germany, England, Iceland, Ireland, New Zealand, and two states and one territory in Australia in banning glue traps. And hundreds of companies and other entities have prohibited their sale or use. These bans will help animals—including mice, squirrels, and birds—who may endure slow, agonizing deaths after being caught in these inhumane devices.

What Is a Glue Trap?

A glue trap is a small board made of cardboard, fiberboard, or plastic that’s coated with a sticky adhesive. It can ensnare any small animal who wanders across or lands on its surface.

Animals trapped in the glue panic and struggle, which causes them to become even more helplessly stuck. Often, the glue tears off their fur, feathers, or skin. Some break bones or even chew off their own limbs in a desperate attempt to escape. The screaming of ensnared wildlife is extremely upsetting to people who don’t know how to “dispose” of these sentient beings. Left alone, the terrified, injured animals die, sometimes days later, of blood loss, shock, suffocation, or thirst. Or they die from being crushed in the garbage, which is where the instructions on the traps advise consumers to put them.

The U.S. Centers for Disease Control and Prevention warns the public not to use glue traps because they increase people’s exposure to disease. Animals stuck in the glue continue to produce urine and feces, through which pathogens, including hantavirus, salmonella, and the bacteria that cause leptospirosis, are transmitted.

Glue traps are not a long-term solution for controlling “unwanted houseguests.” When rodents are killed, the survivors breed faster, which causes an increase in the population! And the devices fail to address the source of the problem: If holes aren’t plugged up and attractants aren’t removed, more animals will move in to take the place of those who have been killed.

Places That Have Taken Action Against Glue Traps

In addition to the countries that have already banned glue traps nationwide, others are catching on. France banned the use of glue traps to hunt birds; in Australia, the Australian Capital Territory, Tasmania, and Victoria banned the traps; and the U.K. has proposed a ban on them.

Well-known companies and institutions—including JPMorgan Chase & Co., American Eagle Outfitters, more than 100 airports nationwide, and even the New York City Police Department—have also sworn off vile, unsanitary, and ineffective traps, and massive corporations such as Rite Aid, Dollar General, Family Dollar, Dollar Tree, Dollar Tree Canada, Target, and Walgreens have stopped selling them. But others have not yet done so.

Don’t Be a Bystander—Take Action Against Glue Trap Cruelty

If you ever see that glue traps are being used to capture and kill animals, contact those responsible, ask them to remove all traps immediately and pledge not to use them again, and then contact PETA.

If an animal is stuck in a glue trap, pour a small amount of cooking oil or baby oil onto the stuck areas (avoiding the animal’s nose and mouth to prevent suffocation) and gently work the animal free. Injured or weak animals must be rushed to a nearby veterinarian or wildlife rehabilitator. Note that it’s illegal in the U.S. to use glue traps for wild-bird control, so if you see a bird caught in a glue trap, please immediately alert your state wildlife or local animal control officials.

Whenever you see glue traps being sold, send a polite letter to the store manager. Ask them to stop selling the traps and point out the many companies and entities that have already sworn off or pulled glue traps and opted for less cruel methods instead. 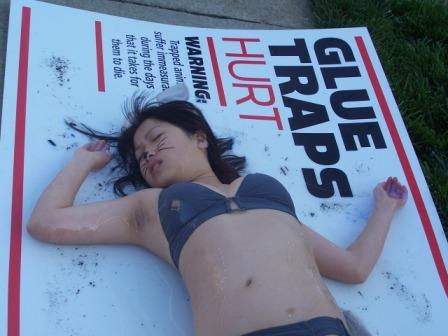 Thanks to caring consumers like you who have taken action, the list of entities that have prohibited using and selling glue traps is growing. Urge others to follow suit: