World-renowned actor and model Joanna Krupa has always been keenly aware that we’re no different from other animals. Once again, she’s gone to the mat for them to challenge people to reflect on speciesism in a new way. Check it out:

In Joanna’s startling new video for PETA U.S., she is punched and left helpless on a city street—all just for her sweater. Those around her don’t even blink or show an ounce of compassion while she lies on a sidewalk. Shocking? Well, sheep in the wool industry experience similar abuse for their wool—they’re punched, cut, and dragged, and the necks of some are even broken.

PETA entities worldwide have now exposed horrific cruelty at 117 wool operations in six countries on four continents, and the story is always the same: abuse on an almost unimaginable level.

“They kick ’em, they punch them, they cut them while they’re trying to get the wool off, and they die in agony and pain. And people need to realize next time they go to the store, they should check the tags.”

Sheep are gentle, loving animals who—just like humans—experience fear, stress, and pain, yet in the global wool industry, they endure immense suffering. Because there’s a market for their fleece and skin, sheep are treated as nothing more than wool-producing machines.

Shearers are usually paid by volume, not by the hour, which encourages fast work without any regard for the welfare of the sheep. This hasty, negligent shearing leads to frequent injuries, and workers use a needle and thread to sew the worst wounds shut—without any pain relief. Strips of skin—and even teats, tails, and ears—are often cut or ripped off during shearing. Even on “sustainable” and “responsible” farms, workers beat, stomped on, cut open the skin of, and slit the throats of conscious, struggling sheep.

No amount of fluff can hide the fact that anyone who buys wool supports a cruel and bloody industry.

Even on small farms, sheep are routinely mutilated when holes are punched in their ears, parts of their tails are cut off, and their testicles are ripped out, all without painkillers. Much of the world’s wool comes from sheep who undergo “mulesing,” a painful procedure in which farmers cut chunks of skin and flesh from sheep’s backsides, often without any pain relief, in a crude and cruel attempt to prevent a maggot infestation called flystrike. And once their wool production declines, most sheep endure a terrifying death in a slaughterhouse.

Like Joanna said, there are so many beautiful vegan options out there. You can feel fashionable without having the weight of an animal’s death on your shoulders. Please join the millions of people all over the world who know that compassion is always in fashion. Save a sheep—don’t buy wool.

Have a Heart—Pledge Not to Buy Wool! 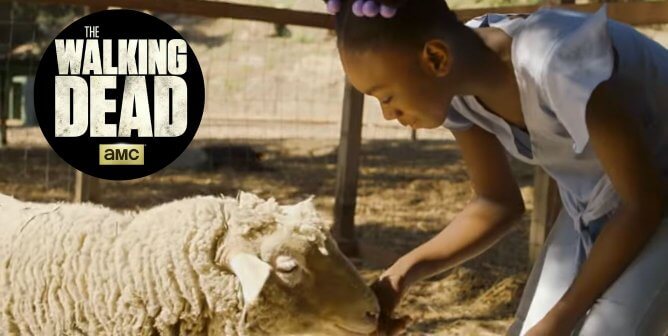