We all loved Jared Padalecki as Dean, the first boy to steal Rory Gilmore’s heart on the WB’s Gilmore Girls. We were smitten again as he played Sam, a hero who drifts from town to town fighting demons, ghosts, and evil fiends on Supernatural. And just when we thought that we couldn’t possibly adore Padalecki more, we found out that he has a huge heart for animals too! Check out Jared’s ad, part of PETA’s “If You Wouldn’t Wear Your Dog” anti-fur campaign. 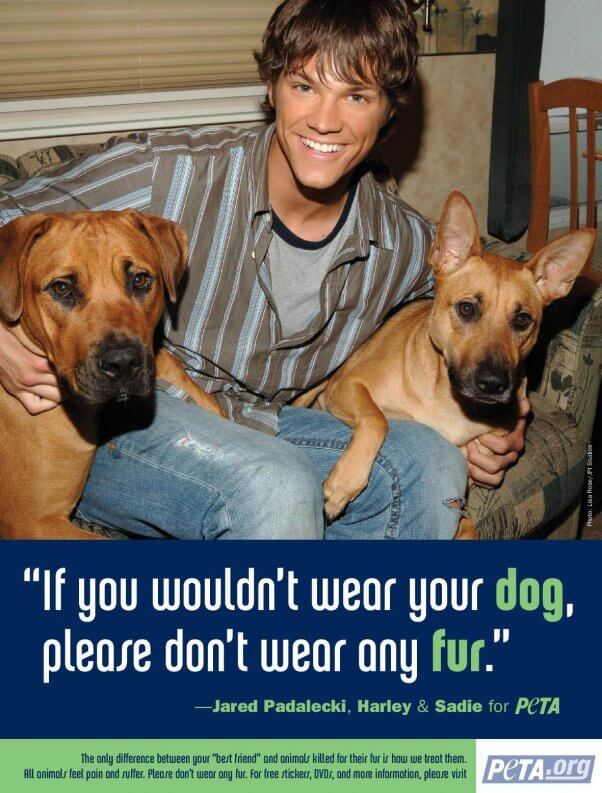 Padalecki wants you to know what happens to dogs—like his canine pals Harley and Sadie—cats, and other animals before they’re made into collars, cuffs, jackets, and other fur items sold in stores.

Jared teamed up with PETA to remind all of us that the only difference between your “best friend” and animals killed for their fur is how they are treated. “Why is it deemed acceptable to kill some animals for their fur and to sit at home cuddling others?” said Jared. “After spending time with my dogs, I can’t imagine how anyone could wear these sweet, sensitive animals.”

Animals who become victims of the fashion industry lead miserable lives. There are no federal laws in the United States—and no laws at all in China—governing fur farms, so the animals on them are forced to live amid their own waste while confined to tiny, cramped cages where they are exposed to all weather extremes.