James Tupper—best known for his role as hunky Jack Slattery on the hit ABC show Men in Trees—is the latest celebrity to speak up and encourage fans to help put an end to the companion animal overpopulation crisis. James stars alongside his dog Harold and the tagline “Adopt—Don’t Buy” in a new ad for PETA. 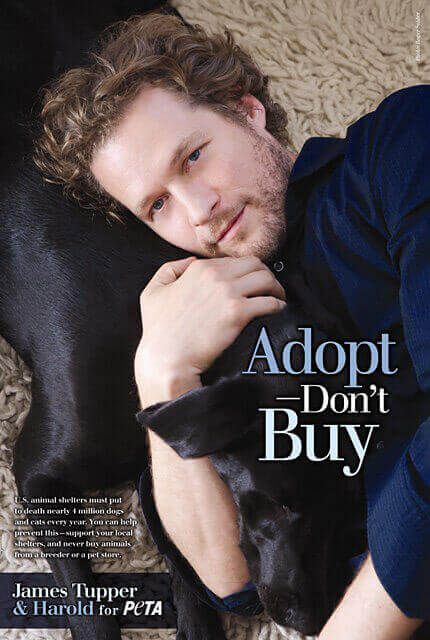 Every year, nearly 4 million dogs and cats are put to death in animal shelters in the U.S. because there are not enough good homes. When you adopt a homeless animal from a shelter instead of buying from breeders or pet shops, you save a life and avoid contributing to the companion animal overpopulation crisis.

James spoke to PETA about his upcoming projects and being a responsible guardian for your companion. Here he is in his own words.

What is your dog’s name?
My dog’s name is Harold. He is a great Dane/golden retriever mix, and he is 4 years old.

What do you do with Harold when you are on set?
I bring Harold to set with me, and he also gets to go on organized “Mountain Walks” for dogs. It’s great … they send me video of him playing in the snow while I am working. He even has his own “pet passport” for travel.

Do you have any funny stories you can share with us about your dog?
The moment I realized I had fallen in love with my dog was when (shortly after I took him home) I had left the house in daylight but then got home after it was dark and had forgotten to leave some lights on. As soon as he saw me, his tail was wagging so hard it shook his body, and he jumped in my arms and peed on me! But that’s when I realized I was in love with him.

Any advice for other dog guardians?
Animals have a very clear spirit, and they are so open to the world around them that they can easily be mistreated. It is very important to be loving with animals. Dogs, especially, want nothing more than to fit into your life, to understand where they are in the pack, and it is important that you let them. If you get off on the right foot [with your new dog], your whole life becomes a better journey.

Tell us something about yourself that your fans would be surprised to know.
I like to dance disco.

You have a lot of fans out there, which gives you a powerful platform to reach people and make a difference. What is your message to them?
My character on Men in Trees, Jack Slattery, lives in the natural world and has found a beautiful balance with it. To create harmony in how you experience the world, and the impact you have on it, takes a lot of microdecisions—you always need to be aware.

Can you tell us a little bit about the Richard Linklater film you are currently shooting (Me and Orson Welles)?
I play Joseph Cotton, a famous stage actor. The movie takes place in 1937, and it centers on a production of Julius Caesar in New York at the Mercury Theater. It was funny because [the producers] had hired lots of Royal Shakespeare Company actors, and they kept coming up to me to hear my American accent to help them with their parts.