Multiple Emmy and Golden Globe award winner and the star of Showtime’s acclaimed series Nurse Jackie, Edie Falco, is urging moms in her new video exposé to consider the bond between mother elephants and their babies and never to support circuses that use animals. The agony that mother elephants endure when their babies are stolen from them is undeniable and can be heard in their cries of distress. They are helpless as their babies are bound by all four legs, beaten with bullhooks, and electro-shocked in violent training sessions in order to teach them to obey.

In nature, female elephants stay with their mothers for their entire lives and males until they are teenagers. Elephants who are forced to perform in the circus are denied everything that is natural and important to them, including that strong family bond. Instead, they are routinely beaten and forced to perform ridiculous, physically taxing, and unnatural tricks under the constant threat of punishment. Elephants used by circuses don’t perform because they want to but because they remember what happens if they don’t. When elephants are not performing, they spend the majority of their lives shackled in chains being carted from city to city.

Edie laments, “I’m a mother. I cannot imagine having my children taken from me and forced to spend the rest of their lives away from everything that matters to them and not be able to do anything to help them.”

“Mother elephants in the circus cannot help their babies, but we can,” concludes Falco. “Never take your children to the circus. Let’s teach our kids to respect and show compassion for all beings—both human and animal.”

In this exclusive interview, Edie talks about alarming video footage that made her choose a vegetarian lifestyle, her adopted dogs, and why animal protection is society’s responsibility:

Join Edie in helping to stop cruelty under the big top by never attending a circus that uses animals and by opting for cruelty-free entertainment for your family instead. 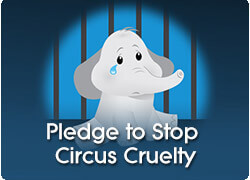