He may be known for causing total chaos, but when it comes to protecting animals, actor Dean Winters wants to be sure everything’s in order.

Tornadoes. Hurricanes. Floods. Earthquakes. These natural disasters are as terrifying for animals as they are for us. So if you or your family has an animal companion at home, it’s critical to have a plan in place to keep them safe if disaster strikes.

If you’re asking yourself, “Where have I seen that guy before?” the answer is probably everywhere: Sex and the City, 30 Rock, Law & Order: SVU, Brooklyn Nine-Nine, Oz, Rescue Me (we could go on). Winters has been a TV regular since the late 1990s. But his newest gig as animal advocate is by far our favorite role yet.

“And most importantly, never, ever, ever leave your animals behind,” Winters reminds viewers as he snuggles up with an adorable rescued dog in this “big-budget” public service announcement, which was filmed at Pollution Studios in Los Angeles. Director Paul B. Cummings and (vegan!) executive producer Asher Brown used some very high-tech special effects to run Winters through a series of disasters, including a wind blower and a DIY “earthquake.” (Don’t judge—we’re saving all the money for animals.)

As climate change continues to cause more extreme weather, corners of the country that have historically been spared are now at a greater risk of experiencing natural disasters. This leaves millions more people and animals in harm’s way, making it more important than ever to get a plan in place for the human and animal members of your family.

Here are some tips to help you get prepared to protect your animal companions during a natural disaster: 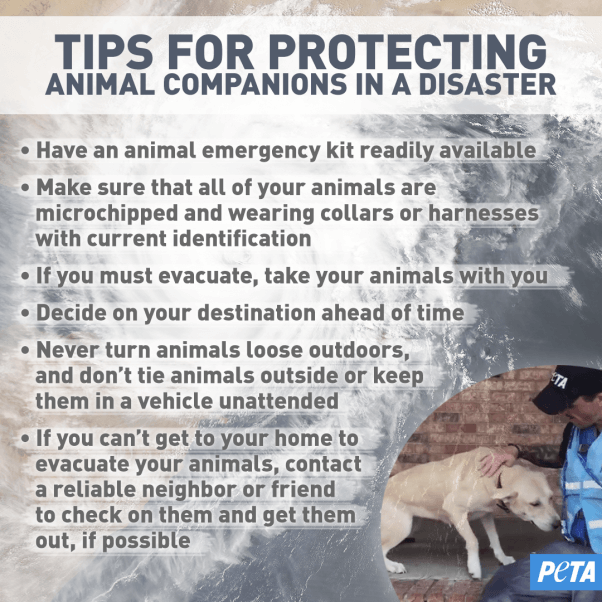 Help Animals in Times of Crisis