“Hello. My name is CircusesHurtAnimals.com.”

Could you ever forget that name? Formerly known as Dan Carron, PETA Foundation staffer CircusesHurtAnimals.com is using that simple introduction to draw awareness to the circus’s routine animal abuse. Now that his driver’s license is officially changed, CircusesHurtAnimals.com only has to say his name to educate everyone he meets about animals forced to perform silly circus tricks. 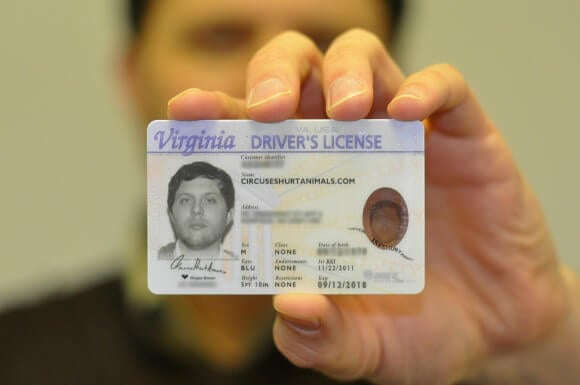 CircusesHurtAnimals.com first boycotted the circus because of the unnatural and cramped conditions in which animals were kept. Circuses constantly travel cross-country for shows—some for 11 months of the year—and confine elephants, big cats, bears, and primates to filthy boxcars or trucks, without access to basic necessities, in all weather extremes.

But it wasn’t until CircusesHurtAnimals.com attended a circus elephant walk—during which circus staff parade ailing, arthritic elephants on hard asphalt city streets—that he learned the extent to which animals suffer for “entertainment.” He observed “how comfortable the trainers were using bullhooks”—steel-hooked tools used to punish and control elephants—“even with people watching.” Photos provided by a former elephant trainer and video footage provided by PETA’s undercover investigations show that when people aren’t watching, trainers use ropes, electric prods, and whips to force baby and elderly elephants to perform unnatural tricks. Watch the video below to see for yourself.

Join CircusesHurtAnimals.com and help stop circus abuse. Not ready to change your name? No problem! Check out these other suggestions: