In honor of national Ice Cream Month, PETA went in search of the best vegan ice cream in America, and it wasn’t hard to find a long list of mouthwatering options. Thanks to the availability of innovative vegan desserts and the popularity of nondairy diets, restaurants across the nation are expanding their menus to include cool, creamy, and delectable vegan ice cream and frozen treats.

It was a tough job, but after lots of drooling by staff members over seven finalists’ decadent frozen treats from restaurants across the nation, we’re proud to announce the winner and two runners-up in our best vegan ice cream contest.

The winner and runners-up will receive framed certificates to place in their restaurants, plus unlimited bragging rights for their top-notch vegan ice cream. Congrats!

KindKreme in Los Angeles has two locations, which both offer a wide variety of raw and organic vegan ice cream treats. But the dessert that earned it top honors is KindKreme’s Brownie Sundae. Take your pick of a raw vegan brownie with two or three scoops of Icekreme topped with raw chocolate or caramel syrup and one dry topping of your choice. Yum! 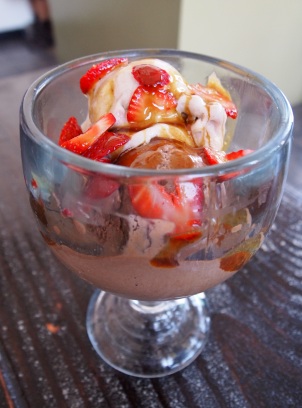 Green New American Vegetarian in Tempe, Arizona, serves up the original Soynami, a soy-based soft-serve concoction that’s whipped together with your choice of candies, cereals, and fruit.

Our other finalists and honorable mentions include the following: