Last night, as Yale University President Peter Salovey arrived for an alumni presentation at Seattle’s Museum of Pop Culture, he probably wasn’t expecting a group of PETA protesters outside. 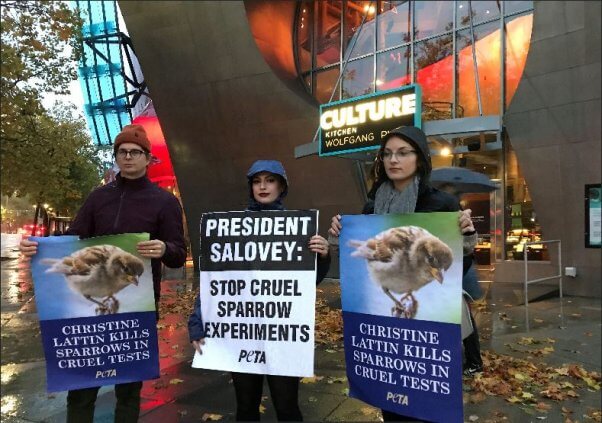 And he definitely wasn’t expecting what happened indoors. As Salovey spoke, a brave PETA supporter took over the stage and told Yale alumni what their donations to the school are helping to support.

Since 2008, first at Tufts University and then at Yale, postdoctoral student Christine Lattin has caught sparrows, subjected them to injections to damage their adrenal glands chemically, inflicted wounds on their legs using a biopsy punch without painkillers, rattled their cages every two minutes, restrained them in a cloth bag, and fed them crude oil mixed with feed, among other procedures. The birds are then killed.

After the disruption, Salovey returned to his presentation, but everyone’s primary memory of the night was certainly this brave woman and her powerful message. Lattin’s experiments hold no value for humans, birds, or conservation efforts. It’s time for them to end, and it’s time for Salovey to do something about it. A leading research institution like Yale must set higher ethical standards whenever unconsenting beings, human or otherwise, are involved in experiments.

You can help. Tell Yale University to stop these pointless experiments before one more songbird dies.